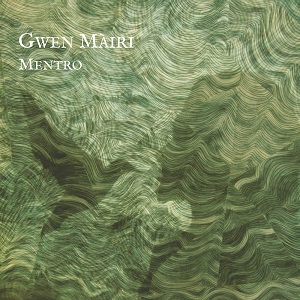 
Gwen Màiri is a harpist brought up in a Welsh speaking family in Scotland. MENTRO means to venture, or to dare. The word mentro was most often heard in Gwen's childhood within the phrase "Paid a mentro!" (don't you dare), but now, as a musician, is the time to dare.

The album features award winning musicians, Gwilym Bowen Rhys on guitar, mandolin and fiddle (returning the favour after Gwen played on his excellent Arenig earlier this year) and Jordan Price on Cello. This is, an album well rooted in Welsh tradition, with words from the Old Testament ("Rhosyn Saron" The Rose of Sharon) and her mother's poetry ("Tawelwch" Quietness). "Yr Wylan Gefnddu" The Black Backed Gull, is a joyous two part tune with the rich rippling harp dueting first with Jordan Price Williams' Cello then Gwilym I IIBowen Rhys guitar. "Tawelwch" Quietness, is an aptly named track, with Gwen's pure voice and delicate harp playing creating a sense of stillness and beauty, again grounded on the low richness of Jordan's Cello.

"Rheged" is a beautiful duet with the harp and Gwilyn's mandolin rippling together like raindrops or water. More like four hands on one instrument than two musicians. The "Y Dydd Drwy'r Ffenest" The Day Through The Window, set bristles with sounds of weather and nature. The trio of players are tightly twined together with a telepathic precision that is impressive. "Rhosyn Saron" Rose of Sharon, has a of Philip Glass minimalism going on with the Cello and Fiddle figures repeating behind the Harp. Gwen Màiri's voice is pure and beautiful once again on this piece that straddles minimalism and traditional music.

"Teifi", named for the west Wales river, is a, buoyant set of tunes with lively interplay between the instruments as they play different parts of the tune. Again and again the counterpoint resonant Cello is just beautiful. "Hwyr" Late, written by Gwen's Grandfather deals with the passage of time and old age. The tune and playing are stately and evocative with the harp initially playing big piano like chords. "Y Feillionen" The clover, features Gwen's sparkling harp against resonant bass notes and some emotional bowed notes from Cello. The interplay between the instruments is just beautiful, so stirring.

"Y Deryn Pur" The pure bird, starts with Gwen's vocal, light and soaring like any creature of the air. First she is backed by the tones of the Shruti Box, before accompanying herself on the harp, with some mandolin trills. The effect is eerie and definitely otherworldly, with some spirited tunes at the end of the piece. "Cyn Gwawr" Before Dawn. The space between the notes on this solo harp piece and the notes themselves suggest perfectly that time before the busy day.

In Gwen's hands the harp paints vivid pictures of quiet, stillness, emptiness and first light. A perfectly phrased, delicate and evocative end to a delightful album.