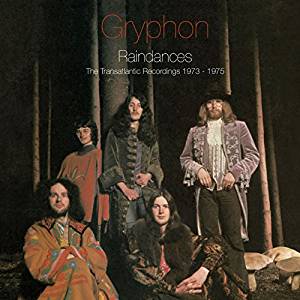 
This almost-all-encompassing anthology-cum-retrospective came out a short while ago as a lead-in to the autumn release of a brand new “40 years on” album by the legendary prog-rock band (this album, Reinvention, was reviewed here a couple of months back). Gryphon was always one of the true originals amongst the plethora of weird and wonderful bands that emerged in the classic Prog era of the early-to-mid-70s. Its premise, however, arose not out of rock music but out of a dawn-of-the-70s idea by Royal College Of Music students Richard Harvey and Brian Gulland, to fuse traditional English music with medieval and renaissance influences, using early instruments such as crumhorns, recorders and harpsichord alongside harmonium, bassoon and the more conventional sounds of guitars, mandolin and organ. Of course, some of the more ambitious folk musicians had already been involved in their own fusions of folk and medieval – notably Shirley & Dolly Collins with David Munrow (Anthems In Eden), Amazing Blondel, and of course Pentangle – but I suppose you could say that in the late-60s musical exploration was the order of the day. Even by those standards, however, the music of Gryphon was quite extraordinary, even (I’d say) genuinely unique, in the sense of quite like nothing else, especially at first.

By the time they signed to the Transatlantic label, Richard and Brian had been joined by wunderkind guitarist Graeme Taylor and percussionist David Oberlé, and the first album they released – produced by Laurence Aston with The City Waites’ Adam Skeaping – was a wildly inventive patchwork of inspirations, expressions and modes encompassing on the one hand fairly straightforward, lively transpositions of medieval dance tunes, and on the other hand progressive dramatic reimaginings of English ballads like The Unquiet Grave, punctuated by the occasional reposeful classical guitar adventure (Crossing The Stiles) and cheeky, slightly silly cod-Python-esque folk-narrative (The Devil & The Farmer’s Wife). The five-minute instrumental showcase Estampie that perhaps best typifies the wildly inventive Gryphon approach, with passages of virtuoso recorder playing, frenetic percussion, sudden tempo fluctuations and sweeping flanging effects; while the heavily overdubbed Juniper Suite pointed the way towards future experiments. But in truth the whole of Gryphon’s eponymous debut album was an unusual, dazzling, dizzying experience, albeit somewhat Heath-Robinson-meets-Lewis-Carroll, with a stunning aural impact that was matched by its equally offbeat, eyecatching cover. The group had by the time of its release in June 1973 built a loyal following across a wide base of music fans, simply by virtue of carrying so many diverse strands within its music.

By the time followup album Midnight Mushrumps appeared in 1974 – a year in which the band broke records by appearing on all four of the BBC’s radio stations in the same week! – the foursome had been joined by bass guitarist Philip Nestor. The album further amplified the creativity of the band’s debut, while embracing then-accepted tenets of prog such as the ambitious side-long title track. Parts of the album originated in music the band had been commissioned to write that year for a stage production of The Tempest (from which play, not Lewis Carroll, the album’s title came). Thus, a more consciously theatrical quality was married to the growing prog influences on the album and its musical expression generally. But while Side 1 of the disc was a cohesive suite, Side 2 was more of a mixed bag, with a majority of its five tracks written in the studio – although the opening Ploughboy’s Dream harked back to the “treated English folk” of their debut. 1974 was the band’s annus mirabilis, with widespread positive coverage for their music and some high-profile gigging, and their next (third) album followed fairly rapidly.

Red Queen To Gryphon Three was a conceptual album based around the idea of a chess game – although, curiously, the actual concept didn’t come into the equation until the post-recording stage. The album is often viewed as Gryphon’s masterwork, and it certainly presents a credible consolidation of influences from prog bands such as Genesis, Yes and Caravan with the earlier medieval music. The band’s final album for Transatlantic, Raindance, was largely composed of shorter songs (in direct response to the label’s pressure for them to be more commercial), and featured a new bassist (Malcolm Bennett) as well as, uncharacteristically, including a cover (the Beatles’ Mother Nature’s Son) among its tracklist. Richard’s lengthier composition (Ein Klein) Heldenleben was the disc’s only concession to extended-prog, but against the odds Raindance still managed to hang together as an album. This despite the enforced exclusion, by label bosses, of four tracks that had been cut expressly for the record (which I don’t recall ever having been available).

Over the years, there have been numerous reissues and repackagings of the four original Gryphon Transatlantic albums, most recently individually by the Talking Elephant label. This new two-disc Esoteric edition of Gryphon’s Transatlantic recordings is well-appointed, with a suitably informative booklet essay and newly remastered from the original master tapes. It purports to gather together all the material from the four albums – but in truth one track from Midnight Mushrumps (the 5-minute Dubbel Dutch) has been inexplicably omitted. I say inexplicably, because its inclusion should (by my humble reckoning) not have entailed exceeding the 79-80-minute threshold … That omission, however, compromises my own recommendation that this would otherwise (and in all other respects) be the definitive edition deserving of a permanent place on your shelves.