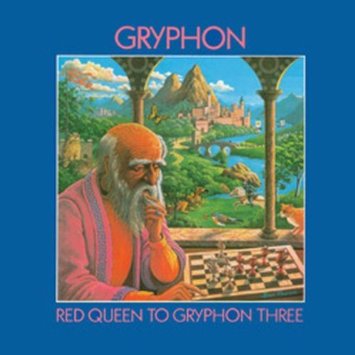 
Gryphon first came to my attention via Karl Dallas's compilation "Electric Muse", more years ago than I care to remember (though still 10 years or so after their heyday). They were notable on that diverse collection of fol-related material, for the Elizabethan jollity of "Kemp's Jig", featuring beaten tambor, organ and crumphorn fol-de-rol. "Kemp's Jig" was the opener of their 1973 self-titled debut album, but by the time they released their third,"RQ2G3" (as we shall call it), they had, whilst retaining organs, tambors and crumphorns, dramatically altered their approach, producing a much more densely layered and (dread word) "progressive" sound.

There are a bare four tracks on "RQ2G3", all of which are mini-suites in themselves. "Opening Move" (yes, it's the opener) has an austere grandeur in its rippling piano and distorted lead guitar, which is offset part way through by crumphorns, bassoon and recorders. "Second Spasm" which follows (logically enough) starts out at a spritely pace, majoring on harpsichord and trilling recorders, before a heavy bass and guitar line takes over, with a heavily phased and distorted organ then bearing the riff-laden weight of the tune awhile. Speeded up guitar and snare drum then take a skipping route through to a return to the first phrases, now firmly based on harpsichord. A further gentle passage on guitar, is succeeded by a return to the bass/guitar duelling, accompanied by tootling soprano recorders to close, sated in an undignified heap of silk.

"Lament" is a suitably mournful tune played initially on crumphorn and recorder over a light 12-string. Acoustic guitar then comes to the fore for a passage, to be succeeded by bassoon, eventually bursting into a more lively duel between guitar and woodwind. Towards the end, the mediaeval effect is undermined somewhat by the invasion of synthesiser, bringing this tune to an end in a mode highly reminiscent of the theme tune to Blakes' 7. "Checkmate" (you guessed it, the final tune), begins all staccato keyboards, launches into a jolly recorder trill, slows to a mellower passage on the low register of the bassoon with a gentle electric piano behind, then builds to a crescendo with combined keyboards, electric guitar, recorder, heavy drums, winding down with doom-laden fuzzy keys to a final halt.

Not perhaps what most of us will listen to on a daily basis, but mighty impressive musicianship, and this re-release is certainly worth a listen if you are at all intrigued by the missing link between Jethro Tull and Gentle Giant. If, like me, those two names fill you with dread, I'd have to say Gryphon are actually much better than that! Great fun.