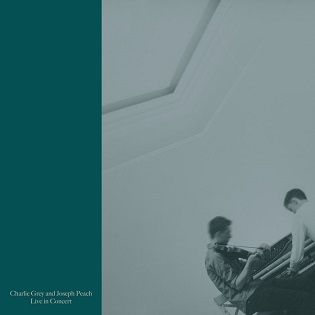 
Instrumental duo Grey (fiddle) and Peach (piano), all gigs cancelled, flash-release a live set that takes their minimalist sound and strips it down even further, reverberating with the ambience of crashing waves on a rocky beach.

Folk Awards finalists, with gigs from Cambridge Festival, The Royal Albert Hall, Celtic Connections and Festival Interceltique de Lorient, to community venues in the north, their music provided the soundtrack to Findhorn Bay Festival's The Buke of the Howlat; and 2019's documentary Air Iomall (Scottish gaelic for On the Edge). The sound the pair produce has a filmic quality, and, though acoustic, sits in tone somewhere between Lau and Michael Nyman.

FATEA have been chatting to Joe, who tells us,
To me this feels and sounds like a live album - there's the wee slips and mistakes you'd edit out of a studio record. But really these don't matter at all … I feel the same excitement and flow I experience when we perform live … a uniquely special thing, and I dearly hope that some sense of this is felt by those who choose to listen.

The album opens with Coig Peathraichaen Chin Taile, translated as The Five Sisters of Kintail - written by Gray for the eponymous mountain range, seen from the Mam Ratagan pass to Glenelg. A slow air, with Grey's fiddle washing over Peach's soft chords. A set of jigs, The Shores of Loch Gowna follows, a major key jig, played gently but with feeling, fiddle full of slows and slurs, cheeky syncopations and swing.

Cregg's Pipes, starts with a mournful piano motive, Peach's playing is economical and superb throughout, taking the backing to unexpected modes, like a wave crashing into a craggy shore, before Donald MacLeod, King of North Rona strides on the beach and weeps bitter tears into the east wind, lamenting a stolen future and a lost past. But, overcoming melancholy, the Big Islands know hope in the simple beauty of nature, a piano motive in a high register spins an arpeggio, notes falling like spring rain, fiddle takes the low line, a promise of summer. Both tracks originate from the Air Iomall project about North Rona and The Shiant Isles respectively.

Joe comments further,
Most tunes … are the result of a deep dive into collections of traditional Scottish and Irish tunes- … we were drawn to the nature of those melodies and felt we could bring something to them in terms of how we play … so it's been a wonderful and refreshing process to focus more on traditional material.

The beautiful melody of Pibroch Domnhall Dubh is taken from the singing of Gray's grandmother, the Gaelic singer Ishbel MacAskill, the album closing with a set of tunes, a mini symphony, Is it the Priest? Opening with a lively jig as the preacher arrives, the set moves through a series of moods and moves, as the life of a small community unfolds, written by Grey, inspired by Sgurr nan Coireachan in the Highlands.

This is music of understated virtuosity to breathe in and experience, the aural equivalent of bottled sea air, bypassing the brain and plugging straight into the emotions. Pour yourself a single malt and sit back. Musical storytelling of the highest order.

The Shores of Loch Gowna