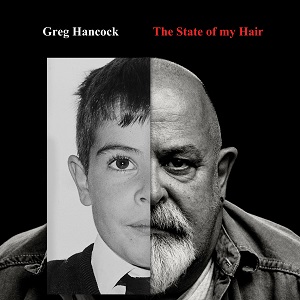 
Greg Hancock's 2017 debut album 'A303' was one of the best independent releases of recent years, combining intricate guitar playing, thoughtful story-driven lyrics, and some inspired performances both from Greg himself and from contributing musicians. With his second album 'The State Of My Hair' Greg has taken the elements that made 'A303' so satisfying and exponentially expanded upon them, creating a record that manages to be at once lush and intimate, widescreen and highly personal in its approach, and it's a cracking achievement.

Beginning with fragmented noise that gradually reveals the song, 'My Mother (And The State Of My Hair)' is a surprising and thrilling opener, with hints of John Martyn in its combination of groovy-fingerstyle guitar, keyboards and double bass - it sets the tone for an album that pushes at the boundaries of folk in arrangement, instrumentation and subject matter across its thirteen tracks.

With a runtime of over an hour there's a lot of material here to absorb and Greg tackles some heady subjects: ageing, dementia, sex, love (unrequited, passionate and cosy), the fallibility of memory, underage drinking (and fumbling), emigration, childhood, hair loss; but the wide variety of moods and instrumentation maintain interest and repeated listens reveal something new each time - a keyboard part you hadn't noticed, a clever turn of phrase that passed you by previously: it's a piece of work that keeps on giving and improves with each listen.

An incredible story teller, Greg manages to observe and comment on both his own experiences and the lives of others, showing us that other people's stories are as much part of our own life as ours are part of theirs, and all thirteen songs are full of well crafted lyrics that will surprise you, make you laugh, or even make you cry.

The aural landscape is equally as engaging - not only are Greg's guitar and vocal performances as strong as ever, but the credits also list some eighteen different instruments, including, but not limited to: sousaphone, euphonium, mandolin, and even the Puerto Rican cuatro on 'Sarky Sally', which also features a string quartet - that may seem a lot for a 'folk' record, but Greg and producer George Arnold manage to skirt around the edges of over-egging the pudding - each interjection and overdub is perfectly pitched, contributing without overshadowing the basic tracks, and ultimately enhancing the listening experience.

'The State of My Hair' is a bold and brave record. It might not satisfy the 'folk police', what is folk music if not the stories of our times and the experiences of lives led translated into words and song?

And, when it comes down to it, genre is merely a way of defining our musical tastes and what really matters is whether something is good or not and 'The State Of My Hair' is not just good - it's great and you should make a concerted effort to hear it as soon as you can.