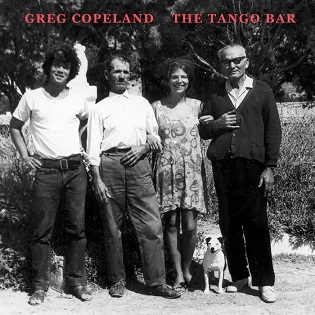 
I was introduced to the music of Greg Copeland about 4 years ago via a somewhat circuitous route. I had written a review for FATEA about Penny Nicholls. One of the songs on it, "Leaning Back And Laughing" written according to the album sleeve by Steve Noonan, really stood out for me. Following the publication of the review, I was contacted by Steve and he asked me if I would review some of his work too, which I was very happy to do. Whilst discussing this he told me that the song I had identified as being outstanding had been co-written by Greg Copeland.

Doing a bit of research about both Steve and Greg, I discovered that they were both great friends of Jackson Browne whose music I love. I thought therefore that I would be on safe ground. Steve then suggested that I might like to review one of Greg's albums which I subsequently did for FATEA. The title of that album was "Diana And James and had been recorded and released in 2008. I described it as "Overall this is a delightful album, beautifully produced and thoughtfully written. It is probably best listened to in a quiet room with a glass of something to accompany you."

Now we are in 2020 and Greg has released another album. I think it is fair to say that Greg is not a prolific music maker, possibly regarding his career as a songwriter as being more important. He has written for many other singers and his lyric writing has become a byword for class. Why produce quantity when you can produce quality?

"The Tango Bar" is, according to Greg, a time, life, and the Universe. It's the place where we find out who we are." Insightful and thought provoking. His music can be labelled as earthy folk with a touch of West Coast America and Country thrown in. Greg's voice has a melancholy timbre to it and his delivery is as laid back as Don Williams.

This album is a little unusual in that it contains only 9 tracks and Greg takes the lead on just 5 of those. The opening track "I'll Be Your Sunny Day" features Inara George on lead vocals supported by just a piano, It provides a beautiful opening to the album and sets the scene for what is to follow. "Let Him Dream" features Greg and his producer, Tyler Chester. "Scan The Beast" delivers a commentary on modern life. "Lou Reed" is a tribute to the man who is a hero of Greg's not just for his music but for his tenacity and determination.

Caitlin Canty takes the lead on the next three tracks with Greg contributing some backing vocals. "Better Now" is, for me at least, the outstanding track of the 3 featuring her vocals. "Beaumont Taco Bell" contains some truly wonderful pedal steel guitar work from Greg Leisz to match the delightful vocals from Caitlin. A definite late-night song!

Greg has either written or co-written all of the tracks and I think it is here that he is most comfortable, allowing the lyrics to express his feelings about life, love and just about everything else. It contains beautiful heartfelt lyrics, which perfectly paint a mosaic of life. It is not an album to set the pulse running wild but it will mellow your mood and bring a warm glow to you.

Greg is a remarkable song writer and performer, fully deserving all the accolades that he receives.