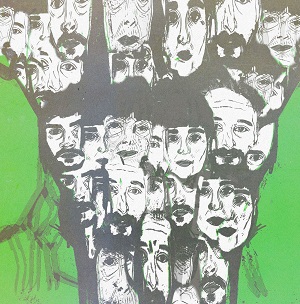 
Green Ribbons are Debbie Armour, Frankie Armstrong, Alasdair Roberts, and Benjamin Webb and this self-titled album is a celebration of a capella music. The album has a live feel to it, which enhances its authenticity and blends four rich voices. I think this album works because of the way in which the lead vocal varies and is complemented by the others.

To those who find a capella en masse a little challenging, please take this album song by song because it provides a true folk experience. Each artist is featured solo, in duet and in full ensemble, which replicates the addition of different instruments in accompanied songs. It is clever, offering a level of variety that is essential in pulling off an entirely vocal work.

"The Well Below The Valley" is a traditional song, thought that was originally written in the early or mid-19th century, although evidence to support that is thin. It supposedly tells the story of Christ being refused a drink by a Samaritan woman whom he meets at a well but there have been varying interpretations over the years. The title track "Green Ribbons" is a passionately delivered lament of the torment of losing a sweetheart, and for me the album's highlight song. As the group's bio states that green ribbons were once sued to denote insanity in the nineteenth century.

"Geordie" is I think an adaptation of Robert Burn's poem of the same name, impressively sung in dialect. There are multiple interpretations of the song, which tells the story of Geordie's wife attempting to prevent his execution by gathering monies (in this case 500 crowns) as tribute to the king. This particular version ends with a successful outcome! "The Week Before Easter" is sung here from a woman's perspective. I have heard the same song sung equally passionately from a man's. It's one of the beauties of traditional music that songs can be adapted in this way.

"Jeannie Jenkins" is again sung in convincing dialect, and delivered solo almost like a traditional 'diddle'. "Heathery Hills" is another solo delivery, and not "The Heathery Hills of Yarrow" that I expected it to be. So I am still digesting and trying to understand the story and its origins. "Garden Song" appears at first to be a celebration of edible indigenous plants, but I suspect from its chorus that it's more a witch's lament "I feel my foundations are crumbling / And another friend turns their back on me".

I believe "Ima Nema" is a Balkan folk song, or at least based on it. Delivered here in less than a minute, it serves to lift the mood ahead of "Lady Margaret" (also I think known as Fair `Margaret and Sweet William) which is essentially a ghost story. This version has Lady Margaret as the survivor where previously I had heard one where it was William.

The album concludes with three songs that bring a capella confidently into the modern world, and a final traditional song. "A Question" focuses on social divisions, and is quickly followed by "Seasnake Island" and "Softly Spoken Man". "Here's a Health" returns to the best tradition of folk music to bring the album to a close.

This is a bold project but vital because it not only upholds the traditions of a capella singing, but brings it bang up to date. Stories have been passed down through the generations through song lyrics, and are very often the most accurate accounts of social history. Listening to the stories behind the songs is an essential part of the experience, so don't flit tracks or you will completely miss their meaning.