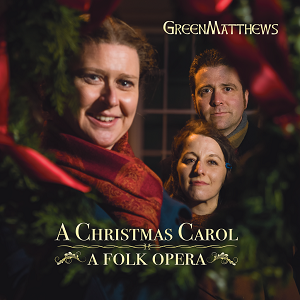 
Mindful of the current revival in the fortunes of the folk-opera, and equally mindful of the evergreen popularity of Christmas, it sounds an eminently logical step to combine the two… enter fortuitously onto the stage Chris Green and Sophie Matthews (here combined as GreenMatthews), those two charismatic and youthful performers who under the name of Blast From The Past have presented a series of special themed shows, primarily of a seasonal bent or, in the case of 2014’s The Men Who Marched Away, featuring songs of The Great War.

Their latest extravaganza is yet another instance of Chris and Sophie’s inexhaustible creative energy, whereby they have ambitiously retold Dickens’ Yuletide classic with new words set to a series of traditional English melodies (some seasonal, but mostly not). Over its 52-minute span, the whole story is sub-divided into 20 defined chapters, with the principal scene-setting narrative, from which point all subsequent events unfold, given at the start in roughly the form of a traditional ballad Introducing Scrooge. The melody for this ballad is cleverly utilised throughout as a recurring leitmotif almost, and forms a unifying thread. Further individual folk tunes are then utilised for individual events, or linked events (as in the three Ghosts’ successive appearances, for example). The musicians show a keen grasp of theatre, though without ever descending into over-theatricality or hamming-up, and their portrayal of the essentials and incidentals of the story are carried out in the best songmaking tradition (in both their sharp wordsmithery and apt “borrowing” of traditional tunes).

Their adaptation shows great flair in drawing the listener in and keeping his/her interest, although it might be felt that the folk opera’s strength and unity is also a potential weakness, in that the recurring melody may pall with the amount of repetition it receives during the course of the whole work. I could easily counter that observation, though, by noting that Chris and Sophie, with the constant help of Jude Rees, prove skilled in ringing the changes both in terms of chosen featured singer (all three are equally proficient) and differing instrumentation (Chris’s bedrock of piano, bass and occasional drums are variously augmented by his own guitar, mandocello and accordion, Sophie’s flute and English border bagpipes, and Jude’s oboe and melodeon). (In fact, I might be tempted to recommend a change of name to GreenMatthewsRees, such is the extent of Jude’s contribution to this venture.)

Overall, the basic style and idiom of the folk-opera is directly appealing, fresh and honestly likeable in a gentler, light-textured folk-rock-ish way. It’s an intelligent, well-realised and most entertaining adaptation.