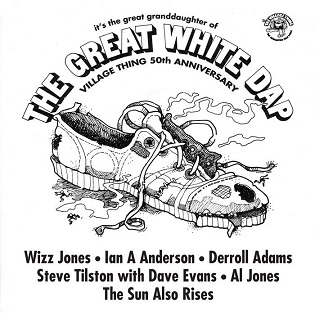 
The snappily titled The Great Granddaughter of The Great White Dap is a 6-track EP to celebrate the 50th anniversary of the self-proclaimed "Alternative Folk Label" , Village Thing Records.

Vilage Thing was a short-lived niche label which existed from 1970 to 1973 which released a couple of dozen albums in relatively small quantities , many of which are highly prized by collectors of what is now known as "Acid Folk" or "Psych Folk". Original Village Thing records often exchange hands for hundreds of pounds.

Village Thing's eclectic roster of artists included such talented artists as Steve Tilston, Dave Evans, Ian A Anderson, Al Jones, Wizz Jones, Derroll Adams and the duo The Sun Also Rises , and all of these are showcased on this cracking new EP .

The EP gets off to a fine start with Wizz Jones's superb "When I Leave Berlin" . Guitar maestro Wizz is backed here by the band Lazy Farmer with their unique double banjo and flute line-up.

Bristol-based Country Blues picker Ian A Anderson was one of the founders of Village Thing Records , along with Gef Lucena and John Turner. Here Ian is on great form with "Time Is Ripe" from his 1971 album "A Vulture Is Not A Bird You Can Trust". Ian went on to co-found the folk music magazine Southern Rag which morphed into Folk Roots and, subsequently, fRoots.

Steve Tilston is undoubtedly one of our finest singer/songwriter/guitarists and he made his recording debut with Village Thing in 1971. Steve's "An Acoustic Confusion" is highly sought-after by collectors but is now, fortunately, also available on CD at a somewhat more affordable price. As a real bonus for Steve's many fans, this EP features an unreleased gem of a track that was recorded for his debut album but which was not included as there was insufficient running time on the vinyl record.

This track , "What Would You Be?" is as good as anything on "An Acoustic Confusion" and features labelmate Dave Evans on guitar and vocal , as well as Village Thing co-founder John Turner on double bass. A real find.

Singer-songwriter Al Jones made one album for Village Thing , 1973's "Jonesville" and from that record we have "Tell The Captain" . Al Jones was clearly a talent to be reckoned with , if this appealing track is anything to go by.

The sixth and final track on the EP is "Flowers" by mystical Welsh Psych-Folk duo The Sun Also Rises who made one much-prized album for Village Thing in 1970 , which is as rare as hen's teeth , although now available again thanks to a re-issue on Light In The Attic Records. The Sun Also Rises were Graham and Anne Hemingway and are frequently compared to other "Acid-Folk" acts such as the Incredible String Band, COB and Dr Strangely Strange , which is a little unfair as they had their own , very distinctive sound , as evidenced by the magical, hallucinatory vibe of "Flowers".

This EP is a fine introduction/tribute to an innovatory and pioneering record label which burned brightly for four short years but left an indelible legacy which is celebrated here. Ghosts From The Basement should be congratulated for this excellent tribute.