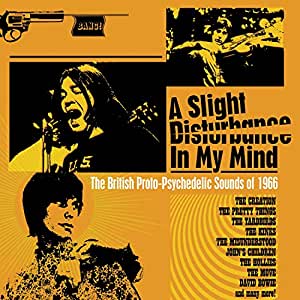 
The basic thesis of this wondrous compilation is that the year 1966 was a key year in the development of British pop, propelling the primitive pop and imitative mod-beat of the mid-decade into the wildly experimental psychedelic age. A rather simplified view perhaps, but one containing more than a grain of truth. No argument, however, that this rapid transformation of the music came about through a cataclysmic collision of contributory factors: an increasing maturity of outlook in the parallel spheres of musical activity represented by songwriting and production, an increased awareness of new sounds and studio possibilities, an increased desire to express in music the expanding consciousness of the age, and of course an increased cross-fertilisation of transatlantic influences (particularly from the States).

To my mind, the creative hub of 1966 has in popular perception been somewhat overshadowed by the oft-pedalled cliché that 1967 was the acme, the halcyon year - but as this three-disc treasure-trove proves, the sounds of '67 didn't just spring from nowhere (I might even be persuaded to argue for 1965 as the wellspring-year). Some of my favourite 45s of all time are vintage '66 … and a number of honourable runners-up appear (I'm sure by no mere accident!) on this compilation, which has obviously been curated by experts in the field and with access to a good spread of recordings. These take in the "mainstream" (in the sense of oft-comped, like Shapes Of Things - but you don't mind duplicating the occasional track when it's placed in due context, as here), as well as the delightfully obscure - of which there's a vast, and healthy, majority. The latter category will of course be the principal interest to us connoisseurs, not least since it contains several "cult collectibles", originally-unissued tracks, alternate versions and demos in addition to infrequently-comped also-ran bands, many featuring early appearances of now-household rock names tucked away in nascent group lineups.

Early sides by Al Stewart (a "still-sad"-style Yardbirds cover) and Beverl(e)y Martyn prove of more than passing interest, while there's also a decent helping of tracks sourced from the lesser-known adventures of bands like the Bee Gees, Hollies and Moody Blues, and welcome outings for Hurdy Gurdy Man (not the Donovan song, but an original by proto-Quo outfit The Spectres) and the Yardbirds' incendiary Stroll On (from the Blow Up movie soundtrack album). Room too for gutsy remakes of 50s numbers like Downliners Sect's searing garage-rock take on Glendora by Downliners Sect and The Renegades' thrusting cover of Thirteen Women (the original A-side of Bill Haley's Rock Around the Clock!).

OK, so at times it's very obvious that some of the more obscure bands had already been avidly imbibing formative sounds like Rubber Soul and seminal records by the Beach Boys, Byrds, Dylan and (at home) The Who, Kinks and Yardbirds - but they all made the music their own in the context of their own milieu. For instance, it proves impossible to resist the strutting confidence of The Score's brazen cover of Please Please Me, or the seriously charmed ambience of tracks like The Creation's catchy Painter Man, The Artwoods' crazed but whimsical Molly Anderson's Cookery Book (it was a stroke of genius to follow this with Tax Man by Loose Ends!) and The Ugly's' sinister nuclear-themed classic The Quiet Explosion. Or for that matter, the unalloyed nightmarish shock-horror of that crucial Move B-side Disturbance, from which this comp takes its sub-title. I just haven't space here to turn the spotlight onto too many other turned-on faves amongst these delectably weird musings, but you do need to sample album-track oddities like Manfred Mann's You're My Girl and The Kinks' Fancy. For Brit-pop in 1966 wasn't just fuzz-drenched freakbeat heaven - although there was a lot of that, and stonkingly good it was too…

Everything here sounds Great, even the slightly less well-recorded cuts, and the achievement of gathering it all together under one roof is considerable cos the sequencing is brilliant. The accompanying booklet delivers a typically insightful and succinct three-page David Wells essay and 48 pages of pretty comprehensive track-by-track notes that convivially straddle the divide between geekdom and fascinatingly super-informative background with abundant discographical and incidental detail to satisfy the appetites of the hungriest trivia-junkies - together, of course, with truckloads of repro-memorabilia and photographic evidence! I'm tempted to put this excellent set in the hallowed bracket of Nuggets, as one of its era's essential comps; either way, it's one of the best of the imprint's clamshell boxes, maintaining and even surpassing the stunningly high standard set by previous boxes.

I DIG EVERYTHING David Bowie