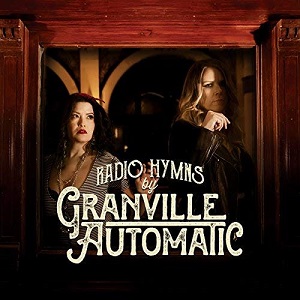 
Named for a 19th-century typewriter, singer Vanessa Olivarez and guitarist Elizabeth Elkins have a penchant for history, their latest album delving into 200 years of Nashville lore and legend. It starts at the beginning with 'Summer Street', a steady drum beat and chiming guitars underpinning a song inspired by Timothy Demonbreun, a French-Canadian fur trader who become the city's 'first citizen' and juggled two families, with a wife and five kids in Illinois and a mistress and four more in Nashville.

Joined by Ben Fields, 'Black Avenue Gallows' is a more country-rock number which recounts the town's last legal hanging when, in 1865, four thieves held up a city alderman's coach and, with none admitting as to who fired the fatal shot, all four were hung in the titular alley, three of them taking several hours to slowly strangle.

Driven by throbbing bassline, an early highlight comes with 'News of the World' which recounts the story of Ike Johnson, the showman bartender at the bar in the basement of the Southern Turf building on Printer's Alley in what was then known as the Gentlemen's Quarter. Living alone on the third floor, he ensured the poor paper boys all had shoes in the winter, carried drunkards, kept the secrets of businessmen gamblers and quite literally held the curtains while prostitutes serviced Congressmen. However, just before Prohibition, the building was purchased by the Nashville Banner newspaper. And he was told he had to move out. The day before he was due to leave, he was found dead of a self-inflicted gunshot wound.

Featuring Jim Lauderdale, the bluesy lope 'Marbles' moves to the early 60s, the title coming from the name disparagingly given to the recently demobbed Jimi Hendrix by the locals on account of his wild and eccentric performances at the now long demolished clubs Jefferson Street clubs, buried, as the change-themed lyrics note, under the Interstate 40-Jefferson Street Interchange.

An emotively sung piano ballad, 'Affair of Honor' slips back in time to the mid-1800s when, as Andrew Jackson was embarking on his second bid for presidency, his opponent unearthed the fact that, when he wed his wife, Rachael (in whose voice it's sung), she was already married to an abusive husband in Kentucky. They remarried legally after she divorced. But when the scandal re-emerged it so badly affected her that she died of a heart attack shortly after his victory.

Featuring pedal steel, a fiery electric guitar solo and vocal from Better Than Ezra's Kevin Griffin, another slow but muscular sway, 'Treaty Oak' refers to the tree where, in 1783, city founder James Robertson signed a treaty with the native nations, the lyric referring to the blood upon which the houses were built and when the tree was struck by lightning in1956.

Co-penned with Matraca Berg, the title track recalls how, in 1974, the Ryman Auditorium (named for steamboat captain Tom Ryman who gave up his wild ways when he found God and founded a church on the site), the original home of the Grand Ole Opry, was saved from the wrecking ball when large numbers of the public including such musicians as Emmylou Harris, protested against the plans (led by Roy Acuff of all people) to raze it , the WSM in the lyrics referring to the Opry's radio station.

Another colourful figure from the city's history is documented in 'Adelicia', this being Adelicia Adkins who, married off to slave trader, transported his body home in whiskey barrels when he died while they were visiting New Orleans prior to the Civil War and used her inheritance to build what is now Belmont University.

And so it goes, the remaining five numbers all continuing to mine tales and figures Nashville's fascinating and mostly forgotten past, 'Saint Bethlehem' being about train robber and prison escapee Gus Hyatt; the waltzing 'The House that Fell Down', co-written with Lauderdale, tells the fate of the mansion upon which now stands Music Row's hugely successful country music publishers Big Loud Shirt; the rockier 'Blood Medicine' about an 18th century house to where opium addicts would come to sample the titular concoction; 'The Barber's Wife' a pedal steel laced waltz based on a famous 1913 murder trial and the yellow ribbons women's rights protests in the court.

It ends in jaunty style with 'The Thing', inspired by Jesse Babcock Ferguson who, in 1857, was drummed out of the Church of Christ by fellow reverend David Lipscomb after preaching to his outraged Sunday congregation (his church subsequently burned down) about Spiritualism and the existence of ghosts, the song about walking the fine line between the truth and a lie.

Granville Automatic remind that deception, drugs, debauchery, murder, adultery, religion and love are all at the heart of country music. They even make up a lot of the songs too.

A Little Of Both