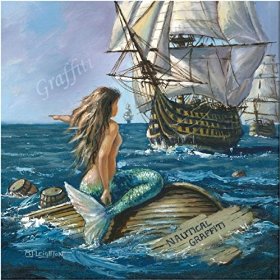 
It's no secret that I consider the dna of a folk album to be a history lesson, a geography lesson and a death or two. Recently there's another criteria a local flavour with universal appeal and hailing from Dorset, I've been spoilt rotten recently what with Ninebarrow, Kadia and now Graffiti,though Graffiti have pressganged the whole of Kadia into the making of "Nautical Graffiti", along with Lucy Watkins to perform harmony vocal.

Graffiti are the duo of Will Adams and Simon Swarbrick and "Nautical Graffiti" an album dedicated to the 250th Anniversary of the launch of the Royal Navy's last remaining battleship, HMS Victory, along the way taking into account the people and activities that have fuelled our naval heritage.

The album actually starts with the sinking of the Mary Rose, one to extend back that recognition of the role the Jack Tar, but more importantly, fate has made it one of the iconic sinkings a tragedy that stretches from the Tudors into the 21st century psyche.

The song for me that captures the local flavour with universal appeal is "Isaac Gulliver" a man from Kinson, now a parish on the edge of Poole, but at the time the place for organising smuggling along the South Coast. Smuggling was the tax evasion\avoidance scheme of its day. Ignoring the semantics it was a massive industry though for the poor and working class, it was a death sentence if you were caught, for the rich and wealthy a fine and a promise not to do it again. Gulliver himself was known at the time as King of the Smugglers and did quite well for himself, making his way up through the social stratas.

Whilst contemporary in sound, these are songs that are strong in the tradition, you can imagine them being taken by the fishermen of Poole to the Grand Banks and beyond, adapted and given other local character and place names.

"Nautical Graffiti" is a wonderful debut album, one that explores a part of our heritage that we are in danger of forgetting and in that alone a worthy endeavour, but this manages that with a real sense of style and atmosphere.