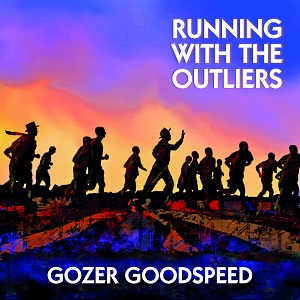 
Having first come to my attention via singles and Eps, the West Country's Gozer Goodspeed, released his debut album, "Running With The Outliers" at the rump end of 2019 and a damned fine album it is to.

Gozer has honed his craft with a multitude of gigs in the West Country, developing a sound that sits between folk and blues rock, with more than a hint of both surf, in the guitar stylings and punk in the delivery meaning that it stills feels delightfully rough around the edges, more than capable of leaving a nasty scrape or two, but also has that capability of delivering a killer cut.

Even on the album it's stripped and I'd imagine it's more so in the live environment, hopefully this album will give him the boost to be able to take his sound further afield, because on this listening it's something I'd really like to spend sometime listening to in a , no longer smoky, cellar bar.

"Running With The Outliers" has a real growl to it, largely from Goodspeed's distinctive vocal, that has elements of a hell and damnation preacher, but also from the fuzzy, driving guitar. Throw in a few chants, I guess as an audience fill in live and you have an album that's filled to the brim and ready to bounce a cork around the room at any given moment. Go for it.