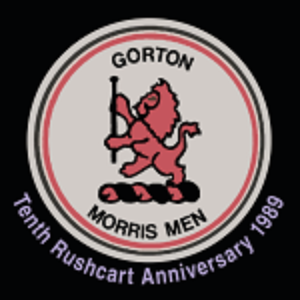 
This release inhabits what is very much a niche-market, even within the niche-market of folk traditions and customs. But it's undoubtedly an important one (if not a labour of love) for Epona's label boss Mike Billington, who has a personal history with the subject. In 1979, Mike was a producer and presenter of the weekly folk programme on BBC Radio Manchester, also a dancer with the Gorton Morris Men, who in 1979 had revived the Rushbearing ceremony that had in the 19th century been a key part of the local tradition in the Greater Manchester township of Gorton. Briefly, this involved rushes being cut around September to strew on the hard rammed earth or stone-flagged church floors to give some degree of comfort or warmth for those poorer members of the congregation who couldn't afford a pew; there was then a ceremonial strewing of the new, fresh green rushes to replace the year-old, flattened and brown rushes.

This CD is a loving restoration of the original BBC recordings made by Mike of the tenth anniversary revival of the Rushbearing custom. It presents a series of interviews with participants and followers as well as live recordings of stages of the actual proceedings, taking the listener through the cutting of the rushes to the building of the cart and then on to the events of the day itself.

It's important to note that this is in essence a speech-based documentary rather than a music-based CD, and the only actual music we hear is the Gorton Silver Band leading the procession (track 12), a brief snatch of melodeon, and the congregational singing of the hymn Lord Of The Dance (track 15). Thus, to be fair, the name credit may mislead - for this is emphatically not Morris On!…

For those with even a passing interest in local folk traditions, however, this 50-minute sequence of interviews, location recordings and conversations is of educational value and would constitute a must-hear. But I have to say that even for the enthusiast it's likely to be destined for the less accessible of his/her reference shelves. In all honesty, for everyone else it's more of a once-over-with-interest listen, for all its importance as a permanent archive of a tradition that stretches back hundreds of years, an archive that undeniably needs to be preserved.