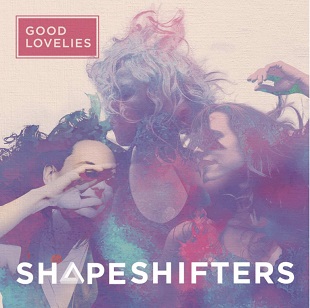 
Produced by Daniel Ledwell, the follow up to 2015's 'Burn The Plan', their fifth album finds Canadians Kerri Ough, Caroline Brooks and Sue Passmore in shimmering folk-pop form, the benchmark being set from the start with, one of three co-writes, the glorious 'I See Gold' with its finger click percussion and interwoven harmonies, the chorus of its optimism in the face of adversity lyrics housing the album's title.

It sets the bar high, but the effervescent, drum thumping 'Take Me, Take Me', another love effusion, clears it effortlessly as, with its piano, omnichord and lap steel, does the rhythmically choppy, almost Latin shuffling sway of 'I Had A Dream'.

With scat-like backing vocals, stabbing keyboard chords and horns, the mid tempo airy shuffle 'Lightness' maintains the pervasive love lifted me theme, the pace slowing for the walking beat 'When We Were Young' with its evocations of sunshine 60s balladry or perhaps even The Carpenters.

Co-written with Peter Katz, piano ballad 'Daylight', the only number to break the four minute mark with its undulating, muted drums and horn splashes and ache for a new start lyrics affords another highlight as the album enters the home stretch with the whimsical twinkling 'Hurry Up', a bedtime lullaby for Caroline's daughter (but also about her not growing up too fast) featuring the 'pitter patter' of squawking kiddie voices at the close. Finally, it plays out with the sublime unaccompanied three part opening harmonies of 'This Little Heart', a hymnal to the unpredictable giddy eddies of the human heart that rides a swirl of banjo and bowed electric guitar as it slowly ebbs only to build again to a horns-laced Celtic infused martial beat crescendo that sees you out on a spirit-stirring high.

"We are the heavy lifters", they sing in a celebration of women's capacity to take on many different demanding roles. Let them lift you too.

Take Me, Take Me