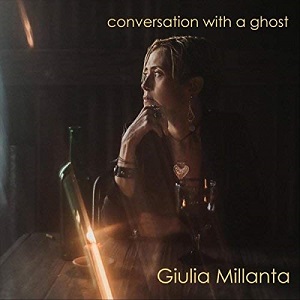 Giulia Millanta
Album: Conversation With A Ghost
Label: Ugly Cat
Tracks: 12
Website: http://www.giuliamillanta.com
.Born in Florence and based in Austin, for her sixth album, partly prompted by the recent deaths of several close friends, Millanta addresses the concept of loss and its outcrops.

Working with musicians that include bassist Glenn Fukunaga, accordionist Joel Guzman, guitar legend Marc Ribot and Kimmie Rhodes on backing, and produced by Gabriel Rhodes, who also handles piano, saw and assorted guitars, it opens with the slow sultry groove of 'Blinded By The Sun' with John Mills on sax before, Ribot on guitar, sliding into a slow bossa nova and surf noir sway for 'Hourglass', building a mood of unease through its image of urban paranoia ("See them walking like ants down there…I get lost inside the crowd just one heart screaming loud") and lines like "No need to run /can push the bullet back into the gun", ending with a potential suicide in "As I stand here on this roof/ I ask my God to show me proof/a meaning please just let me know/ take a bow and end the show."

That undulating Latin rhythm continues, giving an itchy groove to 'Puppet On A String' with its baritone guitar, resonating twangs and throaty sax compounding her snakelike vocals as she breathily sings of a cold hearted siren "knitting her web/for the incoming fly/she knows what he wants/by the look in his eyes."

The surf noir returns on the jazzy slow sway of Lonesome Throne, tremulous guitar and spare piano notes mirroring the sadness and despair etched into whisperingly sung lines like "She's scared of this life/It'll float away like a feather" and "no direction ahead/she goes round and round", the narrator there to be her saviour ("I'll kiss every moment on its lips/life unfolds at my fingertips").

Millanta is fluent in four languages and on 'Violence', another slow swaying sultry number burnished by accordion, is sung in Spanish, Italian and English as, addressing an innocent child, she details a dark and dangerous world, warning that "You're too pure to understand/the evil that's inside of man" and sketching a city where "there's darkness on these city streets/like the wolf in the book I read you/the filthy rich the dirty poor/the pawn shops and liquor stores."

On 'La Stanza', a slow bossa nova groove with a baleful surf tremolo riff, she sings the foreboding verses in Italian, switching to English for the more optimistic chorus of "she's going to fly away /into another day." With Mills on muted jazzy clarinet, 'Coney Island', a love letter of loss to Brooklyn, is another sensual, breathily sung bossa nova, while, in distinct contrast, the urgent 'Enough Is Enough' with its semi-spoken verses and sax feels like a heady cocktail of jazz, rock and cabaret.

Elsewhere, 'Lila (Spread Your Arms)' brings a desert moodiness to its lyrics about mental disturbance, 'Expiration Date' has a Hispanic waltz flavour, seasoned with steel guitar and the acoustic-based title track hovers around a similar musical border, the fragile, vulnerable vocals imbuing lines like "break the silence/it drives arrows through my heart/sit and talk with me a while/just be a voice in the dark" with a weighty sadness.

The album ends with a final return to surf noir territory for the slow marching 'Space' as she concerns the way we often cannot see the light because we focus on the darkness, or, as she puts it, "in close quarters with myself/so close I couldn't see/the freedom ahead of me." It's a haunting listening experience.

Blinded By The Sun