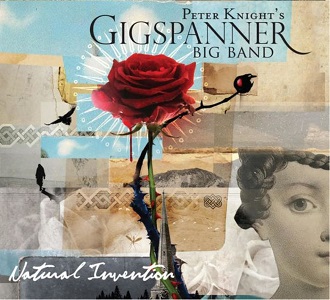 
Peter Knight's Gigspanner, initially running alongside his last years in Steeleye Span, have existed as a recording band for ten years, longer as a performing trio. NATURAL INVENTION is the first studio album released by the Gigspanner Big Band, an expanded line up that has existed for just over three years. With certain parallels to early Steeleye Span, itself made up of a leader from an earlier folk band, and existing duos, the Big Band is bands within a band. Peter Knight is joined by Philip Henry and Hannah Martin, award winning duo Edgelarks, John Spiers founder member of another folk big band Bellowhead, alongside guitarist Roger Flack and percussionist Sacha Trochet. A gig spanner, for anyone who hasn't heard this before or seen one of the earlier trio albums where it featured in the graphic, is a slightly wry musician joke term for the metal pocket sized utilitarian bottle opener, as essential for live music as gaffa tape and someone in black to go "one two" repeatedly into the mikes before the band comes on. However humorous the origins of the name, the band is a dream wish list line up, woven together over three years into a sound that is lively, fresh and as the title suggests (itself coming from an earlier Fatea Magazine review by David Kidman...no pressure then), inventive. Like the earlier band they take the spirit of the folk source material and doing something exciting and fresh with it.

American folk ballad "Awake Awake" opens the album, taken from Cecil Sharp's English Folk Songs From The Southern Appalachian, it demonstrates the interconnectedness of music and musicians. Hannah Martin who has one of the great voices of Folk, atmospheric and compelling without being showy or histrionic, delivers an arresting vocal with Phil Henry's shimmering dobro that conjures both the far East and the Appalachians and Peter Knights commanding fiddle. The piece through some inventive group vocals shifts into the tune "Ellen Smith" where everyone flies. "Long A Growing" is a strangely prophetic song about life ended early that has been chilling my blood since Steeleye's version in 1976 and Ashley Hutchings Allstars 80's modern take. With an atmospheric violin intro, Peter delivers a compelling vocal, over swirling instruments, retaining and building that melancholic otherworldly sense. "Searching For Lambs" is another traditional classic with a superb vocal from Hannah, Sacha's inventive percussion and a great instrumental exchange between harmonica, concertina and fiddle that takes it somewhere else.

The rich vocal harmonies continue through the band's warm rendition of the chilling "Betsy Bell and Mary Gray". Hannah and Peter's vocals work well together, a sweet opener for the eerie electric Gypsy violin and funeral drum instrumental that follows, again and again the album is shown to be aptly titled, as Gigspanner make traditional material their own. Lovely group vocals at the end too. "Daddy Fox" is invigorated by the band, blending group vocals with lithe hoedown music, this is living folk dance, invigorated and buzzing with life. The rich call and response of "Haul On The Bowline" is a showcase for some wonderful arranged group vocals, evoking something of the feel of Bellowhead. The Breton tune "Laride à Six Temps", brings a European flavour and an opportunity for some stunning turns by Peter and John. "The Snows They Melt The Soonest" and "Courting Is A Pleasure" are given Gigspanner makeovers, who make their own way through these well known songs, with arrangements that are interesting and inventive. Hannah delivers a spirited vocal on "Courting", conjuring the 'pleasure' in the lyric in a way that other versions don't, with some atmospheric playing from the rest of the band. "The Star Of Munster and Reel Du Tricentenaire" pairs the Irish classic with a French Canadian tune. Sacha's percussion bobs and bounces between the speakers on this track, driving the violins, concertina and some decidedly prog guitar onwards in this 'all hands on deck' closer.

This may be Peter Knight's Gigspanner Big Band, but what's refreshing, what keeps your interest, is that every musician comes forward and adds something distinctive and vital to the music. The French-Canadian tune was learnt via the medium of You Tube, a twenty first century step up from scouring books in Cecil Sharp House library. The internet, for all its faults, the band says, allows music to travel very great distances. Like music itself, they say, it has no regard for borders, which is a great way of summing up the fertile, invigorating spirit of Gigspanner in its Big Band mode and this exciting album.