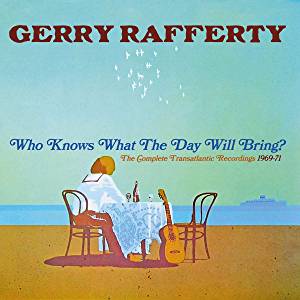 
Seeing the set’s subtitle, The Complete Transatlantic Recordings 1969-71, should give you the picture of what’s collected here on its two amply-stocked CDs. That rather implies that we get Gerry’s entire recorded output for the Transatlantic label – the 1969-70 recordings with Billy Connolly as The Humblebums (two LPs – The New Humblebums and Open Up The Door), together with the contractual-obligation solo album (Can I Have My Money Back?) that he recorded in 1971 after forming Stealers Wheel. Although strictly speaking, that’s not quite the sum of it. Let me explain…

The first CD presents 14 of the Humblebums LP tracks – i.e. just the songs which Gerry wrote for the duo – topped up with two outtakes and two backing-tracks from the time of third album Open Up The Door. (OK, it probably makes sense to omit those Humblebums songs written by Billy, but it’s not as if Gerry didn’t contribute to those tracks…) Whatever, it’s a great collection, of course, and contains all the true classics from the duo days – just to name a few, there’s Look Over The Hill And Far Away, Her Father Didn’t Like Me Anyway, Patrick, Please Sing A Song For Us, All The Best People Do It, Keep It To Yourself and Song For Simon – but technically it’s not the “complete” Rafferty Humblebums recordings. (To get those in completeness you need the 2005 Castle/Sanctuary anthology Please Sing A Song For Us, which also usefully includes a handful of contemporaneous radio session cuts.)

The second CD is where this new set really comes into its own, though. It presents the entire 1971 album Can I Have My Money Back? in all its glory, in the process restoring to its correct LP placing the original, non-overdubbed version of one of its most charming tracks, Mary Skeffington. Following which, there’s 11 (mostly invaluable) bonus tracks, ranging from the tackily-overdubbed Mary Skeffington and the single B-side So Bad Thinking to the strong yet at-the-time-unreleased Who Cares (a song later revisited for the second Stealers Wheel LP) and an alternate take of Mr. Universe and its prototype Bernard. All in all, it’s easy nowadays to appreciate the Can I Have My Money Back? LP for what it was/is – a collection of very-competent-and-better, nay masterful post-Beatles pop-rock.

Who Knows What The Day Will Bring?, whose sturdy package comes complete with a definitive booklet essay, is self-evidently recommending, not just for Rafferty completists but for anyone keen to investigate a seriously craftsmanlike pop-rock album that at the time of its release criminally missed out on the acclaim it so richly deserved and which has been ill-served by subsequent reissues (one may well be tempted to ask now – “can I have my money back” from buying all those earlier repackages?!… somehow I doubt it…)