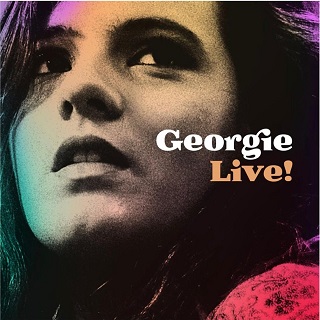 
A Mansfield-born singer-songwriter who ditched a promising career as a professional footballer to become a musician, Georgette Howe got an early break when Jake Bugg invited her to support him, since when she's released three singles and played some 600 gigs. Her debut album takes the unusual step of being a live recording of a sold out hometown show in Nottingham's Trinity Church on which, accompanied by just acoustic guitar and piano she works her way through a mix of self-penned numbers, collaborations and a choice cover, none of which she's previously recorded.

It opens with 'Life After Fear', one of her earlier songs, and immediately shows the soulfulness in her voice that's seen comparisons to Amy Winehouse and underscores the Joolin influences, although her voice isn't as deep as either. 'Daylight Flood' has a bluesier feel, a co-write, like the opener, with Snow Patrol collaborator Iain Archer, a third Archer coming with the emotionally charged 'Setting Sun', about and dedicated to her twin brother. Family are also at the heart of 'Tomorrow's Streets, a strummed dust country sounding number about following your dreams inspired by her mother and uncle that makes a solid companion piece to Jessie Buckley's work on 'Wild Rose'.

A song that had fallen out of her live repertoire, it seems fellow musician and close friend Jonny Wright persuaded her to resurrect it, and he's also shares credits on 'It Aint Me It's You', another country-coloured heartbreak ballad and, by way of contrast, the new soul flavours of Beer Money'.

Elsewhere, other collaborations include the bluesily strummed 'Flatlining' written with Steve McEwan and Ed Sheeran producer Joe Rubel, the gigglingly introduced piano ballad 'Chasing Kites' with Eg White whose many credits include Adele, Tom Odell, James Morrison and Dua Lipa, and, another piano track, the all new, five-minute story song 'Emily Jane' written with the upcoming duo of Rich Cooper and Tristan Landymoore.

The sole cover nods to another influence with her loose-limbed dobro-backed take on Bonnie Raitt's 'Love Me Like A Man', the album ending, back on piano, with arguably its strongest number and performance, the Amy Wadge co-write 'That's When It Feels Like Love'.

She has a tour in support of the album lined up, though unfortunately not until the start of 2020, and hopefully next year will find her in the studio giving some extra muscle to these and perhaps other new material. Those who lost faith with Ellie Goulding when she discovered dance should take note.