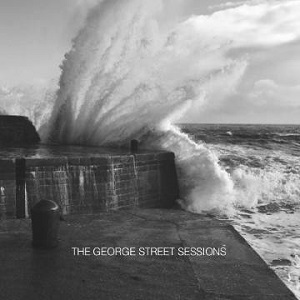 
A club based around the old general store and chandlery in George Street, Cellardyke, one of the beautiful coastal communities of the East Neuk of Fife, a collection of villages with harbours that once supported the commercial herring fishing fleet, and home to newcomers Jo Hilton and Chris Oliver. The acoustic qualities of the property were not mentioned in the agent’s particulars; nor was the vibrant music scene; but a series of chance meetings led to a performance by local musicians Clive Gray and John Moncur in the summer of 2016, and the George Street Sessions was launched soon afterwards.

This album features twenty tracks, recorded in studio conditions, drawn from those performing at the club. A mix of covers, originals, traditional songs and tunes, this is music of, for and by a community. There is a generosity of spirit and a huge variety of material, experience and talent on display. One is never sure what is coming next. With a collection of this length, namechecking all the artists is impractical, and this review is no more than a snapshot.

Mention must be given to strings wizard Demi Forsyth, who was drawn to the old Steve Winwood number ‘Can’t Find My Way Home’ when learning dobro. Already a veteran, despite her years (still only 20), she gives an intelligent reading of this classic. Her voice is clear and evocative, but it is her playing, subtle and soulful, which stands out. One to watch.

The duo of Chris Peebles and Richard Parkinson are reminiscent of early Dave Cousins and the Strawbs on the self-penned ‘Only a Fool’. A hypnotic, queasy rhythm with some great guitar runs, anguished vocals and lovely production flourishes. Iain Gray tackles the 19th century Gaelic hymn that became ‘Morning has Broken’. Billy Briggs channels Glen Campbell covering the Foo Fighters.

Jim Tribble gives us a blast of renaissance harpsichord on William Byrd’s ‘My Lord Willoughby’s Welcome Home’. The first of two tracks by the excellent Mike Bowden, ‘Top Cat’ is an evocative stroll through childhood in the 60s, to a gently picked country blues riff with layers of processed electric guitar giving the piece an orchestral feel.

Two Shades of Grey give us the haunting Sandy Denny classic ‘Who Knows Where the Time Goes’. Artist Richard Wemyss, returning to his childhood home after spells with Orkney and Shetland Festivals, picks up a fiddle (after many years abstinence), and gives us a pair of his waltzes, written in a traditional style and taken from his show ‘the Bernicia Suite’, a concept based on an historic tragedy at sea.

There is rough with the diamonds here, not all risks taken come off, and sometime integrity alone is not enough. But that is the whole and entire point of this album. This is a safe space where anything goes, where anything can be tried. Mostly what comes across is the love of music and performance, and a community of spirit that, ultimately, makes this album a triumph.

A fascinating insight into a living and evolving musical community.