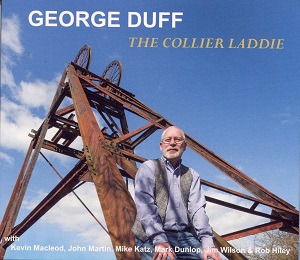 
There can be no better qualified proponent of Scottish and other mining songs than George Duff. The man was involved in underground mineral extraction for most of his working life. The fact that he became a talented singer and musician throughout this time only helped his interest in the genre. This later expanded to include the works of Robbie Burns and other more contemporary writers.

"The Collier Laddie" is brought to the fore as might be expected in this traditional song. "I've trevelled east, I've trevelled West, I have been to Kirkcaldy, The bonne'st lass that ere I spied was following a collier laddie." A rich man fancies a miner's girlfriend and goes to her father to seek his daughter's hand. The fine dress and money does not sway the father and the girl stays with the collier. As a Midlander, once I penetrated George's brogue, this is a tale well told with a fine musical backing. A fine start to the CD.

"The Blackleg Miner." A Northumbrian Song about a miner of a very different ilk. If sung in the Northumbrian dialect the words "work" and "dark" rhyme. A union recruitment song, which is carried along at a toe tapping rate, giving it the attraction that all such successful songs have. The blackleg is shunned and worse in the town. This rendition is well honed and tells the story of a threat to the very life of the man prepared to strike break. This nineteenth century song was subject to a revival in the 1980's when British mineworkers went on strike to try to save their industry. Duff's interpretation is true to the origins of the song and starts with a resonator guitar intro that fits exactly.

"The Banks of the Bann" This separation song is a gem of a ballad which has a lovely tune which George Duff and his colleagues exploit to the full. The traveller is a wastrel who has squandered his money and now cannot approach the girl of a family who enjoy higher status than himself. As I get into this CD I am really enjoying the song selection and performance of these traditional songs from all over the country.

"The Prince of Darkness" Is a sobriquet applied to a well known heavy metal singer from Birmingham. This prince is the darkness of the mine, very scary for a boy of thirteen as he goes down the mine for the first time.. This song paints an very detailed picture of mining over the centuries. No matter how sophisticated the machinery, the perils are the same. Listening for the creaking of the timbers, knowing that danger was a miner's middle name, the camaraderie, "For there's nae colour, creed or race when ye're sweatin' at the face, wi a pick or a shovel in yer hand," and trust in the Lord. This song, written by Ed Miller a the time of New Labour being elected into government, covers the disillusionment discovering that the men in sharp suits are soon gone when their needs are satisfied. The young lad now an old man, works in a mining museum, telling tourists of his work in the past. It is a sad reflection of what has happened to British heavy industry in the last fifty years.

"Green Grow The Rushes," When I saw this song on the list, I thought "I know that one." Not so. This is not the "Dilly Song" that so many of us learned at school. It is a story of life, how we chase riches, mind (look at) lassies and enjoy them. We gain wisdom as we go, but the wisest man is not much different to any of us. You probably need to come from north of the border to gain the most out of this song as some of the expressions used in it's interpretation are in a brogue that may defeat a Sassenach's ear.

"Rattling Roaring Willie." An instrumental intro illustrates the talent behind George Duff in this Album. The song is lively ditty about Willie who is entreated to come home from the fair, to sell his fiddle, buy wine and other wares, but Willie is loath to do this as his fiddle is very precious to him. He simply cannot do it, but he is welcomed home anyway. It is an interesting performance of this song made famous by the Dubliners. A slightly different rhythm and timbre which is attractive and catchy.

"Gin I Were A Baron's Heir" This is a song where the suitor has little to offer his bride but his love. It has some lovely lines in it:
"Gin I were a baron's heir
And could I braid wi' gems your hair
And make ye braw as ye are fair
Lassie would ye lo'e me?"

closing with:
"For I hae naught tae offer ye
Nae gowd frae mine nae pearl frae sea
Nor am I come o' high degree
Lassie but I lo'e ye"

It is delivered with sincerity, love and clarity, it is quite delightful.

"The Eight Hour Day" Another mining song, this time I think originating in America, but George Duff has made it his own, with the dialect being strictly based in the industrial belt of Scotland. The men are sorely pressed by the Master's tyranny and children are put to work in the mine. The workers cannot call their lives their own. They are seeking an eight hour day and should any blacklegs fall, then so be it. This quite the breeziest version of this song I have heard. The full panoply of traditional instruments can be heard in this track and despite the bleakness of the message and the condition underground.

"The Bonnie Irish Maid." This a song I recognise as "Blackwaterside," a leaving song, where the boy is leaving for America, but promises he will be true to his love back in Ireland. The girls in America will surely be beautiful, but they only remind him of his girl back home. This is another track where the musicianship of the players is amply demonstrated. the blend of the instruments provide a bed of sound to support George Duff''s clear story narrative.

"The Recruited Collier." This song tells the tale of the misery of the lass and family left behind when a young miner in a secure (at the time) job, is enticed into joining the army. He might be having the time of his life, but the family worry and cannot bear to hear his tales of war. As the lass builds the fire at home, she handles the coal that once was hewn by her man. It is a reminder that decisions made may not just affect the person making them.

"Remember Connolly" James Connolly was killed during the Easter uprising in April 1916. He was born in Edinburgh but of Irish lineage and was to later found the Irish Socialist Republican Party. This song George sings acapella with only the beat of a bodhran to accompany him. The story of this man is well told in a simple if repetitive tune. This account eulogises the character as a man of conviction and integrity, being a visionary of equality and transparency. They say that the victors in any war write the history of it, perhaps it is interesting to hear an alternative view, a while.

"He Fades Away" The cost to an operator's health of various industrial processes have only really been recognised in the last few decades. This song depicts the situation in which a man who worked in such an industry producing whatever, be it coal, asbestos or any other commodity, suffers for his labours, one verse in particular has a more than a ring of truth to it.
There’s a man in my bed he’s on a pension
Although he’s only fifty years of age
And the lawyers say we might get compensation
In the course of due procedure
But they wouldn’t say for certain at this stage
The lament has an evocative backing as George's strident but stricken vocal cuts through the air like a knife.

"Ballad Of The D-Day Dodgers" One of the better known 'Barrack Room Ballads', this song is a sarcastic description of how Allied troops (particularly those alongside the 78th Infantry Division ) fought their way up through Italy to regain contact with other "friendly" troops. Italian campaign veterans noted that they had been in action for eleven months before the Normandy D-Day, and some of those had served in North Africa even before that. They felt forgotten, poorly supplied and unheralded as they had several of their own D-Days in the course of the actions in which they were involved. The song pays tribute the D-Day Dodgers who forever will rest in Italy. A reference to Lady Astor's unguarded comments is particularly bitter.

"The Overgate" a traditional courting song which when sung in dialect shows it's origin as a tinker's song. A man with a roving eye is captivated by a lass who winks at him. He is lost. The lively performance shows the joy of the song of young men 'minding' young girls.

"The Rigs O' Rye" A leaving song. The suitor puts his lassie's love to the test, by saying that can offer her no fortune and if she goes with him she will earn only her family's disapproval. She convinces him that she will take off with him and take the consequences. It is a song with a happy ending as they marry and have children and have the luxury of living in Brechin in the winter and Montrose in the summer. (I find this intriguing as they are only about ten miles apart. Perhaps Montrose being on the coast gets a lot of winter storms).

"When These Shoes Were New" (aka "Take me out drinking") Probably the newest song on the album, this is a celebration of the drinking culture and how things can deteriorate. You start off with new shoes, clean shirt and looking smart. Later the appearance suffers, stains on the shoes etc. However you still want to carry on drinking, a malaise that can easily afflict the unwary.

This bumper sixteen track album is an interesting and sometimes arresting collection of traditional and not so traditional songs collected from all over. Indeed it is an eclectic mix of mining, work and love songs. The musicianship is superb and the clarity of George Duff's delivery is a lesson to those "trendier" performers who think slurring their words adds to their street credibility. That said, some of the authentic dialects employed make the non Scottish listener concentrate hard to get the full benefit. I imagine the biggest market for this album is north of the border, but it would be a pity if that proved to be the case. I am glad to have it in my collection.