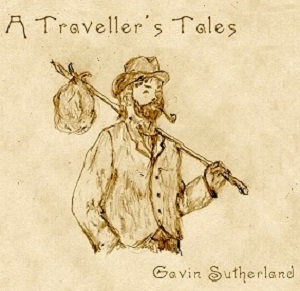 
The younger of the two brothers (the other being Iain) who formed The Sutherland Brothers in 1970 (after a brief stint as A New Generation whose 'Smokie Blues Away' is a lost classic), going on to release several albums, both as a duo and as Sutherland Brothers & Quiver, enjoying a Top 5 hit with 'Arms of Mary' (not to mention Gavin writing 'Sailing') before calling it a day in 1979.

Both brothers went on to solo careers, this being Gavin's sixth album and one that really should put him back in the spotlight. Couched in a blend of rootsy folk and country, as the title suggests these are songs of the road, literal and metaphorical, on which the core backing comes from Sam Lumsden on drums, bassist Dave Sutherland, Steve Watts on synths and Dave McGarry and Terry Butters taking turns on the piano.

Their joined on pedal steel by Nick Zala for album opener, 'The Master's Voice', a waltzing encouragement to "Spread your wings and dream your dreams" that comes with Ronnie Lane and Slim Chance echoes, the journey heading down the easy ambling 'Righteous Road' with Heidi Browne on fiddle and backing vocals, a homage to the "painters and poets (who) put a mark on me."

McGarry on piano, 'In The Eye of the Storm' has a slow swaying, bluesy feel, a smoky edge to Gavin's voice as he reminds that "We're all in the same boat/Drifting on the same sea", before, Browne again on fiddle, he's joined on harmonies by Nancy K. Dillon for the Celtic-Americana of 'The Weary Traveller', one of several highlights, that offers an anthem to hope in troubled times.

Dave Sutherland on double bass and Claire Kennedy providing the gospel coloured chorus vocals, backed by harmonica 'Wheels Are Rolling' is a laid back lazy bluesy lope about getting back on track that suggests a cross between JJ Cale and Mark Knopfler. Indeed, the latter's called to mind on a couple of occasions, the slow march, steel-stained 'Bright Like The Sun' and the swampy country blues 'The Bend of the River', from which it's only a small step to the jazzy Dylan echoes of the lyrically darker 'Gull With A Broken Wing' ("There's a woman on the shore, a child at her hand/A long way to go to the promised land").

Elsewhere, relaxed dust country flavours are to the fore on 'Voice of Reason' and the Texicana shuffle traces of the watching the sun go down sentiments of 'On Friday Hill', both again featuring Zala. The album ends with the reappearance of backing singers Debi Doss and Claire Kennedy on the harmonica blowing, mid-tempo paced tough luck 'Picture On The Wall', another highlight, with they, Gillie Nicholls, Dillon and pretty much everyone forming The Seatown Choral Society for the appropriately named arms-linked, harmonica-backed, swayalong march rhythm end of the journey Home and Dry with its images of faith and community as Sutherland sings "There'll be no dog in the manger/When we find the journey's end."

As an eco-conscious traveller, he's reduced his carbon footprint by packaging the album in a simple card sleeve, but full credits, photos and lyrics can be found on the website. Walk with him and share the stories.