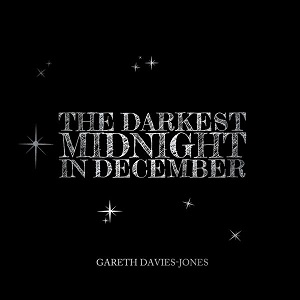 
Born in County Down and now living in Northumberland, Davies-Jones is a well-known name on the Christian music circuit, but, disappointingly, rather less familiar to the wider acoustic scene. His latest, seasonal album (which comes in a gatefold sleeve tied with string) is undeniably targeted primarily at the former audience and those who hold Christmas as a festival of faith rather than commercialism, but a collection of traditional carols and Christian songs given new musical arrangements, one 'cover' and an original that seek to celebrate the different ways in which the Christmas story forms part of local tradition, this is also for anyone who still gets a tingle in hearing 'Away In A Manger' even if they're not believers.

It opens with the self-penned 'Advent', a piano-backed, softly-sung reflection on the run up to "something extraordinary" inspired by the writings of the theologian Frederick Buechner, the melody and vocals soaring in a way that evokes the plaintive best of Elton John.

The album's reimagining of evergreen carols finds its first expression with 'It Came Upon A Midnight Clear', the piano and shuffling percussive guitar work having a touch of Martyn Joseph sparkle. There's three other such seasonal staples, 'I Saw Three Ships' given a shantyish setting, 'The Holly And The Ivy' reworked as a meeting of Celtic folk and American roots and 'O Come All Ye Faithful' imbued with the spirit of Woody Guthrie.

Heading up the somewhat lesser known numbers, starting with a hummed vocal, 'I Wonder As I Wander' is a contemplative Christian folk hymn written - or, more strictly, reconstructed - in 1933 by American folklorist John Jacob Niles, versions of which have also been recorded by such diverse artists as Streisand and Wovenhand.

It's followed by 'Best Wishes For The Season', another percussive guitar setting, with the social issues lyrics adapted from the poem of the same name, by Liverpudlian Stewart Henderson with whom he collaborated on his previous album, The Beauty & The Trouble. Another poem setting, 'Ring Out Wild Bells', a hope for better times, was written by Alfred, Lord Tennyson in 1850 as part of his elegy to his sister's fiancé and was reportedly inspired by hearing the bells of Abbey Church in the parish of Waltham Abbey, ringing out the old year and ringing in the new. It may just be me, but there seems a hint of Jethro Tull here.

Softly sung to just acoustic guitar, 'Jesus Christ The Apple Tree' is yet another rather more obscure poem, first published in 1761 and ascribed to Calvinist Baptist clergyman Rev. Richard Hutchins, the metaphor a Christianised adoption of the English tradition of wassailing apple orchards.

Drawing on his Irish roots, introduced with harmonium notes from 'Silent Night', the piano ballad title track closes the album, the words taken from the first two (of eleven) verses of the Kilmore Carols from County Wexford. Among the many recordings are versions by Sinead O'Connor (with the Glenstal Abbey monks), Cara Dillon and a whispering Bono; none of them are as good as this.

With the radio and in-store music everywhere about to start churning out the usual Christmas chestnuts, regardless of your beliefs, this makes a very welcome change from hearing Slade, Chris Rea, Wizzard and Mariah Carey for the umpteenth time.