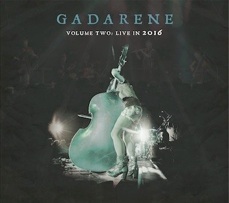 
Gadarene are a difficult band to categorise. They describe themselves as playing ultra-modern ancient tunes, so traditional music but in anything other than a traditional style. That's what makes them exciting. Tradition is used to find songs dating back to 1650, but it's the modern world that provides the musical inspiration, making the tunes sound fresh rather than museum pieces. This live album captures the immediacy of their work and is well recorded, coming from just one set played in Somerset. Each note is clear but retains that spontaneity that comes from having to get it right first time.

Gadarene are Nick Wyke (fiddle), Matt Norman (mandolin), Jon Dyer (flute), Laurel Swift (fiddle and double bass) and Si Paull (drums) but they can also add clog and step dance. In addition they have varying musical backgrounds, from folk to rock and blues to jazz, giving a wide range of styles to add to the mix.

The album opens with An Italian Rant which is known from 1600 and given its English title by Playford himself in 1651. Gadarene, through a combination of flute, fiddle and drums give it a North African feel that immediately gets the feet tapping.

The King's Head Hornpipe, expertly picked out on mandolin sounds Galician before evolving into something traditionally English as the fiddle takes over but even that gets given a swing treatment.

So it goes on. Lord Kelly's Reel was written sometime in the mid-1700s by Thomas Erskine and is described, in its original form, as a Strathspey but played here in a dubstep style with the melody being carried by a mandolin and a backing of syncopated percussive backing from Laurel Swifts's clogs.

The Oyster Wife's Rant includes a venture in techno but without any electronic keyboards although a melodica may have been involved, you wouldn't know from listening to it.

The differing styles could have produced an album that became a random series of experiments but the tightness and skill of this quintet gives a sound that carries across the varying styles, setting them apart as a unique unit who are definitely worth discovering.

The album is now available to pre-order, ahead of the release date of 28th October, but only from their website and tasters are available on Soundcloud. There's a Volume One available, too, covering the period 1694 - 2011.