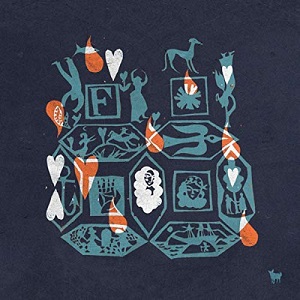 
Originally formed in 2013, drawn together by a shared love of the traditional balladry of (predominantly) the British Isles, this marks the third album outing by the Anglo-Scottish collaboration between viola player and tenor guitarist Lucy Farrell, harpist and fiddler Rachel Newton, Emily Portman on banjo and harmonium, and guitarist Alasdair Roberts also handling piano and banjolin, all notable folk scene figures in their own right.

Featuring all four voices, individually and in harmony, it again takes a clutch of traditional songs and gives them new, innovative arrangements, yet never losing the essence of their roots. Liberally laced with tales of death, loss, murder, and false hearts, it's is, to be sure, a fairly dark collection, kicking off with Farrell initially taking a cappela lead on 'Davy Lowston', a true story-based song of New Zealand origin warning of the perils of seal-hunting, before the other voices and harmonium drone join in.

There have been countless recordings of 'The Dark-Eyed Gypsies' or one of its many various names, recounting how some posh totty is lured away from her husband's bed and the lap of luxury by some ocularly seductive travelling chaps and their singing, forsaking her family to sleep on the ground, eat grass and drink dew. Arranged and sung by Roberts, Portman on concertina and all three women crooning backing refrains, this incorporates verses from Child's collection and a chorus borrowed from Harry Cox's version.

Accompanied by sparse banjo, the Scottish-derived 'False Lover Won Back' has Newton step up to the mark for a rare note of positivity, the quartet's version based on a 1956 recording by Seeger and MacColl. Making it two upbeat songs in a row, featuring Portman on lead 'Write Me Down' was learned from the singing of Birmingham-based Irish immigrant and collector Cecilia Costello, here given a somewhat jazzy feel.

The gloom reasserts itself, however, with a minimal guitar pattern accompanying Farrell's singing of 'False True Love', learned from Shirley Collins' 1967 album The Sweet Primroses, about a woman learning her absent lover's taken up with another, although its original Appalachian incarnation as 'Young Hunting' had her killing him and then being blackmailed by her parrot.

Rest assured though, death's soon back in the frame with a throbbing pulse backdrop introducing Newton on 'The Cruel Grave', percussion and synths building the atmosphere as the song tells of the ghost of drowned and buried sailor returning to his pining lover after seven years to tell her to move on with her life.

They retain a nautical note with Roberts taking lead and playing a spooked cascade of guitar notes on 'The Cabin Boy', not to be confused with the crossdressing of 'The Handsome Cabin Boy' (more of that later), but rather another song of love and loss as a young lass falls for the cabin boy and then dies of grief when, after trying to get him to remain on shore, he goes off and is drowned.

Musically nodding to its American variants, the banjo-accompanied 'My Son David' piles up the body count as, in a dialogue between mother and son, both parts sung by Portman, the former asks whose blood he has on his sword and his admissions start with the dog and build to his brother, followed by a declaration that she'll never see him again.

And, if that's not murder enough, then Newton ratchets up the horrors with the ghostly sounds and unsettling rippling backdrop to 'Down By The Greenwoodside', a variation on 'Cruel Mother', about infanticide and guilt with the blood refusing to wash out. A little light relief comes with 'As I Came In By Yon Castle Wall', a song generally accepted as by Robert Burns, as again accompanied by drone, Farrell sings about a woman rejecting a would be suitor as not good enough and he suggesting she learn a little humility.

Then, accompanied by fiddle, it's Roberts' turn to steer it back to more grim pastures 'Lady Eliza', sometimes known as 'Lady Diamond' and an inspiration for a tale in Boccaccio's Decameron, as the King's daughter falls for the kitchen boy, this not being on, her dad having the lad murdered and his heart sent to his daughter who, naturally, tops herself.

As per the title, the album ends back out at sea, this time without any wrecks or drownings, for a pairing of two songs, 'Our Ship's She's Ready', a mid-nineteenth century broadside ballad about emigration sung in four part harmony, and, again sourced from Costello with Portman on lead, 'I Am A Maid That's Deep In Love', a much covered number about a woman cross-dressing so she can go to sea in search of her sailor lover and catching the eye of the captain, before returning to the first tune, this time with just Roberts and the drone on which it fades.