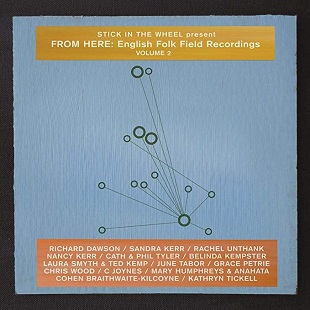 
Just a little over two years ago, those enterprising right-on radical folkers Stick In The Wheel released, on their own label, an album entitled From Here, which was termed in these very pages “a literal realisation of their ethic and mission statement for the careful curatorship of folk music”. This took the form of a fabulous collection of latter-day field recordings that together comprised “a snapshot of the English folk scene right now”. The recordings were made when Stick In The Wheel’s Ian Carter and Nicola Kearey took recording equipment out to various (to them then uncharted) locations within England, where an equal-handed assortment of performers, ranging from seasoned professionals and acclaimed household folk “names” to less widely profiled musicians and humble folk club singers, revealed personal insights behind the impulse they all felt to perform the folk songs (or tunes) they had chosen on the occasion of these field recordings. In doing so, they breathed fresh contemporary relevance into (perhaps sometimes over-familiar) folk songs. The From Here project was thus “not the collecting of songs to fit a predetermined view of what folk music “should” be, but rather at attempt at documenting what it is – a continuum that thrives, flourishes and persists in this country”.

It should have been a foregone conclusion, then, that we should in due course be treated to a Volume 2 – which in a literal sense is exactly that, i.e. “more of the same”: another invigorating plunge into the “bottomless pit” of that continuum, the folk song tradition (note the carefully-drawn distinction here from “traditional folk song”). Volume 2 observes Volume 1’s ideals and methodology and follows the same tried-and-tested recording practice (taking a mobile studio out on the road and capturing performances in the raw, full of verité, integrity and conviction). The presentation format, too, is identical to, and will be (comfortingly) familiar for, purchasers of Volume 1: the slimline package comes complete with a fascinating set of explanatory notes wherein each of the recorded artists gives an honest and lucid account of the personal rationale for his/her particular song/tune choice. This typically involves a summary statement of what the From Here concept means to them, by way of identity or place, feeling or memory (most likely, “this is who I am, this is where I’m from”).

Regarding the artists appearing on Volume 2, this is a completely different cast-list from Volume 1. This is in no small measure due to the fact that no true “snapshot of the English folk scene right now” could be complete without abundant representation from the northern half of this country; and so it proves, with a significant proportion of Volume 2’s tracks having been recorded up in the north or north-east, in the front rooms or kitchens of the artists themselves (while a further three were recorded in the Committee Room of Cecil Sharp House – albeit really only because an opportunity arose, as opposed to any ostensible place-connection).

One other noticeable difference from Volume 1 is that Volume 2 contains no performances from Stick In The Wheel members; the closest it gets is Belinda Kempster, mother of SITW’s Fran Foote, who delivers a robust, confident and measured account of Nightingales (it was recorded in the church where Fran’s godfather is the vicar, by the way, further reinforcing the literal “from here” aspect). Nicola regards Belinda as a “crucial piece of the Essex folk puzzle”, so this track can be considered a cherishable disc highlight and hopefully may also encourage Belinda to make more recordings.

There are plenty of other delights on offer here. One common thread that binds this collection of recordings is that time and again we hear of the revelatory, “hits you right where it should” impact these performances had on Nicola the recordist (who is relatively new to the folk scene and thus readily admits to, in many cases, being hitherto unfamiliar with these musicians’ work). In this category we find Nancy Kerr’s fiddle-singing, which on an intertwined pair of Northumbrian tune-songs evokes a potent sense of personal lineage bound up with ancestral memory – a combination also found on Rachel Unthank’s breathtakingly intense, genuinely-felt portrayal of the slice-of-life Sandgate Dandling Song. This gut-wrenching impact reaches out from the tradition to inform songs composed in our own day too, and the collection contains three brilliant examples. The Almsgiver is a modern ballad telling the story of a local citizen who visited Hexham Gaol to give food to inmates; it was written for a film installation called This Liberty, where it was sung by Marry Waterson, but here it’s sung by its writer, Richard Dawson, in a very different, direct, uncompromising style that may take some getting used to but whose conviction is unchallengeable. Then there’s the two more high-profile real-deal contemporary songsmiths Chris Wood (performing his authentically observational “all-human-life-is-there” opus So Much To Defend) and Grace Petrie (performing what else but her own composition A Young Woman’s Tale, which was written as both a response and counterpart to Ian Campbell’s celebrated now-virtually-traditional opus The Old Man’s Tale, intentionally relevant to her own “from here” life and times). June Tabor returns to The King Of Rome, a song which “found her”, and which she originally championed, over 30 years ago; this song, especially in June’s unrivalled rendition, masterfully carries a deep sense of “from here” in the poignancy of its storytelling. Other notable entries in the From Here contest come from Cath & Phil Tyler, an anglo-American partnership comprising true veterans of raw, un-prettified traditional folk adaptation, and the incomparable (and incomparably-named!) Cohen Braithwaite-Kilcoyne, whose air of total assurance enables him to have fun with the music-hall number Two Lovely Black Eyes. And Laura Smyth and Ted Kemp reprise their own interpretation of “from here” (ie. their singing-out-in-public première) with a signature sturdy, no-nonsense a cappella account of Adieu Sweet Lovely Nancy.

Volume 2’s three instrumental items all carry particularly potent resonances of being “from here”: there’s the unforgettable, evocative sound of Kathryn Tickell’s Northumbrian pipes on a pair of indigenous north-eastern tunes, complementing a perky rendition of traditional tune Nancy Clough played on concertina and fiddle by the incredibly simpatico mother and daughter team of Sandra and Nancy Kerr. Then there’s a medley of tunes (song-tunes as opposed to dance-tunes) from Cottenham, on the outskirts of Cambridge, played by C. Joynes (on guitar) in a rather intriguing “from there” style that I might be tempted to describe as an English equivalent of American Primitive. Interestingly, the source location for the latter tunes is contiguous with that of the rarely-heard version of Barbera Allen performed by Mary Humphreys and Anahata on this volume – to my mind, infinitely preferable to the more commonly-heard version of that ballad, and sporting a particularly gorgeous melody. I must declare at this point that I consider Mary and Anahata to be today’s most passionate advocates of folk tradition; their meticulous research and instrumental and vocal expertise is second to none – 200% earthy rhythmic energy, total expressive understanding and pure commitment – and their performances of traditional tunes and songs really do have the biggest feelgood factor of any you’ll hear, period.

It’s entirely indicative of the all-consuming enthusiasm for the continuing From Here project, on the part both of Ian and Nicola themselves (as recordist-coordinators and enablers) and the participating artists themselves, that more recordings were made than would fit onto one disc. These extra recordings, which will shortly be made available to purchasers from From Here Records as part of the limited-edition bundle (in the shape of a six-track, 24-minute bonus disc), have initially been made available exclusively to Fatea. They comprise a whole EP’s-worth of such a stunning quality that the tracks simply cannot be regarded as also-rans or in any way less essential than the 14 recordings appearing on the standard-issue Volume 2 CD release. In other words, they’re far too good to languish in the vaults or on the cutting-room floor! Three of the six give a “second bite at the cherry” for artists who crop up on the standard CD: Mary Humphreys & Anahata give us a riveting account of the Lord Lovell ballad, one of several unusual song versions Mary has acquired from the collection of Clive Carey of Thaxted. Sandra Kerr updates her own 1984 music-hall-style classic Can We Afford The Doctor? – still utterly relevant today when viewed “from here-and-now”, And the good Mr. Braithwaite-Kilcoyne returns with a lusty take on the hoary folk chestnut Drink Old England Dry on which he himself is led to question the premise of what “from here” means – or should mean – in the song’s temporal or ideological context. The remaining three selections must be regarded as standouts even in the illustrious company of the other 17. The peerless Frankie Armstrong contributes her own composition Lily, a truly mighty a cappella powerhouse performance that summons up all in one song three key aspects of From Here – head, heart and womb – in commemoration of her grandmother and a criminally-forgotten petition demanding an end to wars that was sent to Washington DC back in 1924. Bryony Griffith delivers an authentically abrasive, loom-rhythmed a cappella account of the indigenous Yorkshire song Poverty Knock, one that (like Pete Coe’s version, but different again) forces you to listen to the words and thus completely effaces the over-chummy singalong aura that you get in most folk club renditions of the song. The bonus disc closes with the amazing Will Pound, his unbridled dexterity on harmonica and box featuring on a showstopping, wonderfully bluesy Amazing Grace.

Notwithstanding the fact that a small number of the actual songs chosen for Volume 2 may have been recorded previously by the artists concerned, these new field recordings are entirely fresh, of-the-moment performances shot through with the intensity of “from here and now” and resonating with similarly of-the-moment immediacy.

This series could run and run (if so, then in due course it might even come to be regarded as a kind of latter-day counterpart to Topic’s landmark Voice Of The People anthology). Can’t wait for Volume 3…

Note that there will be two launch events for From Here, Volume 2 – as follows:
1 May at Cafe Oto, London - https://www.cafeoto.co.uk/events/sandra-nancy-kerr/
11 May at The Cluny, Newcastle - https://thecluny.com/listing/english-folk-field-recordings-volume-2-launch/
Can be ordered direct from https://stickinthewheel.lnk.to/englishfolkvol2