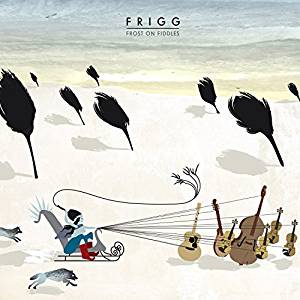 
The seven-piece outfit Frigg is described as a Finnish fiddling powerhouse band – but there’s more to them than just fiddle playing, as anyone who’s seen their showstopping live act will testify. And I don’t just mean that their four fiddlers are joined by mandolin/cittern, double bass and guitar. Little wonder that their seventh album, Polka V, was rated so highly in the awards when it appeared back in 2012. Frost On Fiddles is the band’s eighth record, and another exceptional collection consisting almost entirely of original tunes by band members. Although inevitably drawing heavily on the Finnish tradition, these tunes also manage to range right across moods and styles, embracing elements from other cultures and even rock music. When they started out, Frigg labelled their own style of music as Nordgrass – a fusion of Nordic folk and bluegrass – but again there’s way more to it than that, and there’ve been some startling developments over the 20 years of the group’s existence.

Frigg take their music seriously, but have great fun doing so, and cheeky stylistic leaps abound in their infectious playing. The pair of tracks Friggin’ Polska and False Legenyes in particular, with all of their fast and furious fiddling, can’t fail to bring a large grin to any face (and get all three of your feet tapping!). There’s a vibrant swing to Kesät Kerkkolassa, and the mando-driven Taivalkovski brings newgrass into the frame. Some may even find the animated bustle of Nopeggio’s Waltz surprisingly restful, and the episodic Vonkaus even finds time for a relaxed double bass solo, whereas the more overtly reflective, measured pieces like Deep Water and Kenkkuni & Pikkuni exhibit considerable charm and delicacy. The one exception to the self-penned menu is a tune by Chris Stout paying homage to an old pub in Glasgow (Compliments To The Bon Accord Ale House), given a suitably authentic sense of dash. In the end, though, it won’t matter a jot if you can’t tell your polskas apart from your polonaises – Frigg deliver utterly exuberant and highly enjoyable music whatever the context, full of invention and verve.