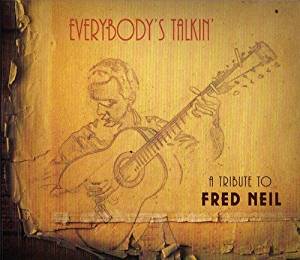 
Fred Neil was a one off, a man sensitive, he related to dolphins, preferring their company at times to people.

He possessed a wondrous sonorous voice like none other for a musician and along the way he influenced much of the Bleecker & MacDougal set, he helped the likes of David Crosby, Bob Dylan and John Sebastian.

As a songwriter and singer he had few equals, yet it was through others recordings of his songs that he found recognition.

So it is completely fitting that this album, a tribute to Fred Neil includes contributions from his peers at the time and also from South Florida musicians influenced by his legacy.

My introduction to Fred Neil's work was through the Lovin' Spoonful and their version of "The Other Side Of This Life" on their debut release "Do You Believe in Magic" here the song is closer to the arrangement favoured by Jefferson Airplane with Charlie Pickett handling vocals and Johnny Salton on electric lead guitar.

"Everybody's Talkin'"', sung by Harry Nilsson in the film "Midnight Cowboy" is reverently and masterfully handled by Keith Sykes.

And with the proceeds from this release going to The Dolphin Project which was originally set up by Ric O'Barry and Neil it is appropriate that "Dolphins" both opens as close the album.

Eric Andersen's version opens the proceeding and with John Sebastian on baritone guitar and harmonica there's a wonderful laid back warmth that simply resonates smiles in the listener.

Matthew Sabetella and Diane Ward offer impressive vocals on closing version adding clarity and sadness to Jack Shawde perfectly matched electric guitar which has a tone to die for.

In between there are twelve tracks that blends folk blues rock and roots, it's a collection put together by long time admirer Jim Wurster and the only complaint I could make is that it just leaves you wanting more.

If you are not familiar with the works of Fred Neil then there is no better starting point and if you are then "Everybody's Talkin' " is surely on your Christmas List if you don't already have it that is.