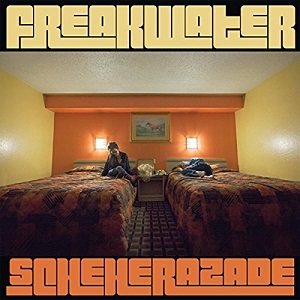 
You might be forgiven for forgetting all about Freakwater, since the band haven't released an album for over a decade - and their tours have become ever more infrequent. But happily they're still going - and for somewhat longer than the Thousand And One Nights the title of their latest album invokes. And still peddling their unpredictable brand of "outsider country" out on a limb on a sub-branch from the tree of Americana. After close on 30 years, the core of the band remains Catherine Ann Irwin and Janet Beveridge Bean with bassist David Wayne Gay, and the current six-piece lineup is completed by Morgan Geer, Anna Krippenstapel and Neil Argabright. The group sound continues to be largely configured around Cath and Janet's signature, uncanny close vocal bond, capable alternately or simultaneously of sensitive wailing weaving harmonies and more strident, upfront Grace Slick/Neko Case rock-chick-meets-country-diva counterpoint, almost as often clashing as harmonising and sometimes doing both at once; the internal tension, the abrasive friction, can sometimes seem near-unbearable.

As ever, the alluring gothic melodrama-cum-psychodrama of Freakwater's music is drawn from the deepest country soul of their land, the intrinsic illogical beauty of the indigenous murder ballad. Freakwater's latest batch of songs was written in white-heat during the summer of 2014, when Cath and Janet convened with long-time collaborator James Elkington for a mini-tour celebrating the 20th anniversary of their landmark album Feels Like The Third Time. It glides between the archetypally eerie backporch gothic of opener What The People Want and the doomy-cute waltzery of Number One With A Bullet, via the simple, curiously frail Appalachian-flavoured Take Me With You and the deceptively yearning Ghost Song, in between broadening out into expansive cloud-lowering wide-screen guitar-laden canvases (Falls Of Sleep), while the west-coast-styled country-rock lope of The Asp And The Albatross is more a cross between Burritos and early-Airplane. The child's-rhyme paraphrase of Down Will Come Baby becomes a twangy B-movie, a plunging cinematic nightmare. Skinny Knee Bone mimics the rhyme and lyric of Dry Bones, its sinister aspect jarring against its ostensibly comforting lilt so that the vocal parts become decidedly unhinged, accentuating the disturbing nature of the conjured images. The cracked delivery of Memory Vendor is barely controlled in its air of epic haunted heartbreak. Maybe once or twice later on (eg Velveteen Matador), the heavier-duty texture of the musical setting seems to obscure or threaten to swamp the impact of the lyrics, and Missionfield doesn't quite reach the invention of the rest of the songs; but generally speaking the half-dozen extra musicians (James Elkington, Sarah Balliet, Warren Ellis, Evan Patterson, Anthony Fossaluzza and Jonathan Glen Wood) work hand in glove with the Freakwater folks and the total effect is both intimately captivating and fulsomely exotic. Just like a classic B-movie, in fact, you might say.

Welcome back, Freakwater - and maybe some of us will be lucky enough to catch the band on its upcoming short tour of the UK and Ireland early next month.

The Asp and the Albatross