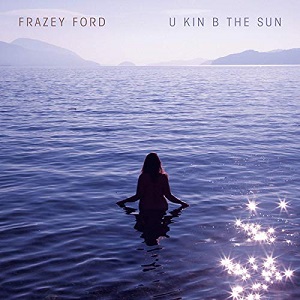 
Frazey Obadiah Ford is a Canadian singer-songwriter and actress. She will be familiar to many as a founding member of The Be Good Tanyas.

The album artwork is beautiful yet simplistic, both at once, a subtle indicator perhaps, of the content within.

Like her previous albums, it is hard to determine whether her sound is pop, folk, country, blues or Americana; all of these sounds merge across the album to create a sound that is unmistakably hers. Her diction isn't the clearest, yet unusually, this doesn't spoil the experience of listening; her vocals carry such emotion that they speak for themselves. I am a firm believer that music is as much about feelings as lyrics.

Standout tracks include Golden, Azad, The Kids Are Having None of It and the intriguingly named title track, U Kin B The Sun. On listening, the impression is that this is a deeply personal album to Ford, an insight into her life.

This is an album of darkness and light and in some ways stands as a metaphor for life itself. It's sound and content will appeal to music lovers of all genres; as such it more than deserves to be heard by them all.