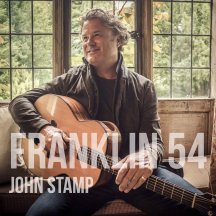 
In 1991, a band called John Stamp and the Name released an album called “Waiting In The Wings”. It appears from my research that it was only ever released on cassette, but I haven’t been able to track down much else about it, other than the fact that John Stamp and the Name were described as a Christian Band. John’s career as a Music and Arts Therapist as a residential childcare specialist took off, and effectively kept John out of the recording studios.

In 2012 John met up with Boo Hewerdine who encouraged him back to writing and playing the odd live gig. I have a massive soft spot for Boo, even though, to date I have never seen him live, as he appeared on Jennifer Crook’s first album and encouraged her to write a song for each month which resulted in her “The Year She Turns” album.

In 2015, John happened to meet an old friend, John Hartley, in Nashville, who happened to be involved in a project recording some Gospel music, which led to the recording of this album, but don’t worry, this isn’t a Gospel album, nor indeed anything heavily diffused with Christianity, even though the record label is Simply Hymns/ Strophic Music.

John Hartley had a lot of contacts in Nashville and was able to bring various musicians to the project such as Will Kimbrough (multi-instrumentalist Americana Music Association Instrumentalist of the year 2004) and Chris Donohue (bassist with Emmylou Harris). Not only that he also managed to persuade the wonderful Leigh Nash, the lead singer with Sixpence None The Richer to duet with John on the track “Blowing Me Kisses” and to sing harmonies on a couple of other tracks. Not bad for a childcare specialist from Derbyshire.

Will Kimbrough is credited with guitars on the sleeve notes. Most tracks feature both electric and steel guitar, so not sure if John is playing or just singing or whether Will plays all the guitar. On the video of "Blowing Kisses" John shows that he is definitely a guitarist as well as a vocalist. WHoeve is playing, the guitar on this album is wonderful, and blends really well with the vocals. John Stamp has a beautiful voice, and I love the way the steel guitar becomes an extension of it. Leigh has a beautiful voice too, as I’m sure everyone knows. It is a bit of a pity that she does not appear on more tracks.

Yes, the music on this album is well written, well played, and beautifully sung, but I do feel it is let down by the lyrics. I do realise that it is grossly unfair to quote a couple of lines out of context, and that you could probably take a couple of lines out of any song to prove a point, but there are several cases on this album where it feels as if the words have been chosen simply to force a rhyme rather than to further any particular message: ‘The waves are rolling, the skies are blue, it feels like heaven in my shoes’ and ‘Remember 76, frying eggs on the road. You got a cheeky tan, it seemed to lighten the load’ feel like they’d be OK as a first stab at putting down some lyrics, but should have been upgraded during a rewrite before committing to the recording studio.

I’m also quite annoyed about the lyrics of the first track, “Stay Calm”. I guess it could have been intended as an homage to “Take It As It Comes” by The Doors, but it feels more of a rip-off to me. “Take It As It Comes” starts ‘Time to live, time to lie, time to laugh, time to die. Take it easy , baby…'. “Stay Calm” starts: ‘ A time to laugh, a time to cry, a time to live and a time to die..’ and has a chorus of ‘Stay calm and carry on’ repeated three times. If it wasn’t so similar I’d love this track as it is a real foot tapper.

There does seem to be quite a lot of repetition, in the lyrics. ‘Stay calm and carry on’ is a message printed on many a t-shirt or coffee mug, so probably doesn’t really need to be repeated too many times for most people to grasp it. The chorus of “Hippy Days” is repeated twice after each couplet. After each chorus of “Moon And Stars” he repeats ‘are for us’ four times. I feel that rather then saying the same thing again, an instrumental break would have been better, especially as the musicianship is so good.

On the other hand, I think these songs would go down very well performed live to a folk club audience. Any audience that enjoys singing along to an artist would appreciate the familiarity of hearing something again and again. So to summarise, lovely music, lovely vocals, a sure fire hit performed live, but perhaps a little more work needed on the lyrics on a follow up album.