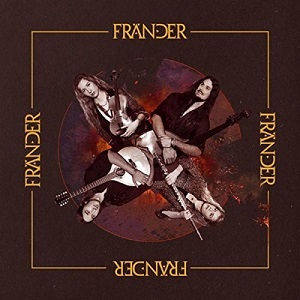 
Fränder, from Uppsala, Sweden, is effectively a family band – as befits the name (an old Swedish word referring to both family and kindred, also to fellow human-beings). In this case, it’s the Dluzewska family – for the lineup consists of Natasja Dluzewska (principal vocals, fiddle), Gabbi Dluzewski (Swedish bosoki, mandolin, vocals), Daniel Dluzewski (double bass, vocals), who are joined by flautist/vocalist Säde Tatar. The story goes that the formation of the band arose out of a lifelong ambition shared by the three siblings to make music together, which was finally realised when they joined forces with Säde in the spring of 2015, making the discovery that traditionally-based contemporary Swedish folk music could be combined with that from the Estonian tradition (where Säde has her roots) to produce something really fresh and exciting. The process of mutual discovery and collaboration, cemented by and developed through world touring, then resulted in the recording of this full-length CD.

This album proves a most attractive proposition even if you don’t understand a word of Swedish, for full texts and translations of the vocal tracks are helpfully provided in the booklet (the band has sensibly set its sights on appealing to a world audience). Fränder have everything going for them, for the combined band sound is both light-textured and dynamic and rhythmically sprung, and the vocal harmonies are both expert and eerily exquisite, with an enviable clarity of textures and good diction. All the band’s vocal work is sturdy, though, within a broad dynamic range and attack.

Just three of the nine tracks are purely instrumental, although Gnistan (a folk-influenced composition by Säde) includes a passage of wordless vocal backing towards the end. Throughout these tracks, Fränder strike a credible balance between the forthright dance-inspired rhythms and the more lyrical passages, and the band’s keen ensemble togetherness is accentuated by the highly proficient (but never needlessly showy) melding of individual lines and parts. The six vocal tracks are also both enviably varied in expression and content and extremely satisfying for repeated play (not always a feature of songs sung in a foreign language, I’ll admit). Centrepiece of the disc is Psalm 210 (of the Swedish hymnal), which (surprisingly perhaps) is set to puckish syncopated rhythms, leading to a bass solo and then a frisky tune The Fire. This track is more than a touch reminiscent of Jethro Tull in folkier mode (say Songs From The Wood), whereas the disc’s closest approximation to a folksong form comes with the traditional En Sjömansbrud (A Sailor’s Bride), complete with catchy repeated refrain. Then, Kulla Ema (Bird’s Mother) really rocks, reminding me of Värttinä – as also did the slightly acerbic harmonies that introduce the group-penned lullaby Vandrar Stum (which boasts lyrics in both Swedish and Estonian, emphasising the close-knit nature of the band’s collaboration). But the band Fränder call to mind almost as often is the 70s-80s Danish outfit Folk Och Rackare – tho’ I wouldn’t wish that particular comparison to be taken to mean Fränder are derivative – it’s more the way they operate, and their vigour and commitment and ingenuity.

I would normally be tempted to rate a first recording from a band such as Fränder that’s new to me as “promising”, but the maturity and intelligence displayed here goes way beyond that. It’s an impressive and well-thought-out debut album which provides a superb introduction to one of the most characterful and original of the latest wave of contemporary folk bands to come out of Sweden.