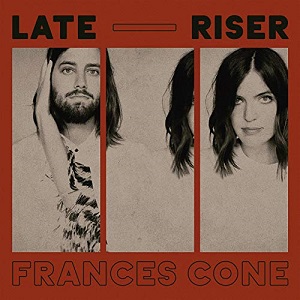 
Late Riser is the second album from the band named after both Christina Cone's father and grandfather (who share a birthday as well as a name), but the first with partner Andrew Doherty. It has had a long gestation period, with Cone and Doherty spending three years recording songs, making sure every tiny part was just as they wanted it to be. The songs have that feel of weight of behind them that you get when they develop organically, and are slowly shaped into the finished article.

The first single, Arizona, is understandably getting a lot of the attention. The song grew out of her reaction to her brother coming out and introducing her to his first boyfriend. It's a very radio-friendly song, with a wonderful soaring guitar melody, and has already been streamed over eleven million times on Spotify. Wide Awake is the second single, and opens the album to great effect. Described as a coming-of-age story about how to accept your own failures and thoughts, it's the perfect marriage of Cone's delicate vocals and a vibrant guitar driven melody.

Outside of the two singles, there are plenty of other tracks to love. Failure is a catchy and upbeat love song, and features Cone's best vocal performance. The title track was written on the G train in Brooklyn, with Cone singing it into her phone to get it captured. It's a captivating song with a lot going on, so you pick out more detail with every listen. All Along closes the record, and features a reprise of the chorus melody from Arizona, in a song about Cone's mother and their bond. It's a haunting way to end the album, but full of intense beauty.

The patient way in which the album has been created shines throughout, with every part of it sounding well crafted, and full of love. These are tracks with meaning, but just vague enough to allow the listeners to find their own truths within. There's touches of classical music to it, a hint of gospel, but most of all this is intelligent indie pop infused with fragility and genuine emotion that will envelop you and take you on a journey