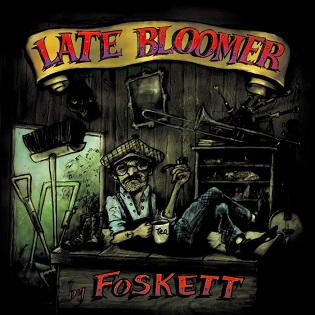 
A producer whose credits include Costello, Loudon Wainwright III, Holly Johnston and Band Aid's The Anti Heroin Project as well as writing songs for Bonnie Tyler, Fish and Kim Wilde, at 71 and ten years after having beaten cancer, twice, Tyenside-born Charles Foskett has just released his own debut album.

Cast in a folk framework and featuring contributions from the likes of Clive Bunker, Paul Jones, Wizz Jones, Toby Shaer and, on violins, Peter Knight, Aiden Burke and Dylan's onetime go to, Scarlet Rivera, much has an autobiographical slant, opening with the massed choral voices and drum roll intro to 'Mahoney's Bridge' , a lively Irish flavoured melody as, in husky voice, he unfolds a recollection from the 50s based on a childhood friend who followed her mother into prostitution ("Even at the tender age of just fifteen years she was turning those tricks like Betty Conrad Spears") because "she had to raise two kids in that dirty old place".

Written by Knight, who recorded his 2014 version at Foskett's studio, the gently lilting 'From A Lullaby Kiss' features Shaer on harmonium with Clive Batkin providing the acoustic guitar intro and outro, it's followed by the infectious self-penned folksy Celtic shuffle 'Sinner Song', Foske's Geordie-infelcted vocals initially throatily whispered before letting rip into a more robust gospel pentinents' romp ("Sinner, Sinner, bring me to your river/Deliver me from evil and take me home") featuring fiddle, flute, Jones on harmonica and original Jethro Tull drummer Bunker brushing the snares.

Written for him by Les Miserables Grammy/Emmy/Bafta winning Orchestral Arranger and Orchestral Conductor, John Cameron who also provides accordion and whistles and joins in on the crowd vocals, 'Hole In The Clouds' rather naturally has a show stopper feel, an inspirational call to face it down when "you're dealt a card from the bottom of the pack" and "hang on to hope, light up your fuse" because "there's nothing left to lose".

Turning up the pace to a frisky bounce, Ian King on mandolin, 'I Want to Run' comes from multi-platinum American songwriter Kevin Fisher and is another song that chimes with his cancer survival in its chorus "I wanna run, I wanna fly/I wanna live before I die". It's followed by the longest track, just over seven minutes, with 'Only Passing Through', which starts off a prelude of sober violin and Foskett providing the spoken narration about the Great Fire of Necastle and Gateshead when, on Oct 6, 1854, a spark set a wool mill ablaze, the fire rapidly spreading across the quayside until "the whole block erupted like Vesuvius on Tyne", killing 53 and injuring hundreds, the track, featuring Wizz Jones on guitar and Hannah Dacey's upright bass, eventually blossoming into the gently swaying song, again suggesting a musical setting featuring variety of different characters carrying the narrative along.

Opening with the sound of lapping waves, 'Isle of Islay' is a fairly obscure Donovan number from A Gift From A Flower To A Garden, given a suitably salt-tanged feel with the semi-spoken vocals and David Grubb's Celtic-coloured mountain mist violin.

Returning to personal anecdotes, Knight on violin and Heather Harding playing tenor horn, the cheery Irish folk swayalong (complete with a Tura Lura Lura Lay refrain) 'Jimmy Gray's Granny's Eye' tells the unlikely but true tale of how, back in 1958, he managed to get a glass eye stuck up his backside. I think you have to hear it for yourself.

Foskett is currently working on an album of duets, featuring, among others, Ralph McTell, Steve Knightley, Paul Jones and Janis Ian, a taster of which is provided here in the Rivera's fiddle-stroked pastoral 'Wild Wild Things', a poignant fiddle backed number written and sung with the late Julie Felix about two old people in reflecting on their lives before seeking their final resting place and how "there's power in having lived a life".

Aidan Burke driving it along with bodhran as well as providing Irish fiddle jig midway, the strummed rumbling march beat 'Knit Your Carpet Well' has a shanty undercurrent to its, hopefully not entirely autobiographical ("Me father kept his pigeons - do you remember that -/And me mother pulled their heads off and cooked them in the fat/And those heads they started squarkin - me father came from the toon"). Again, you can envision this as a set piece on stage.

Sharing lead vocals with Ben Williams and featuring Ellie Lomas on euphonium, the penultimate track, 'Pull On The Rope', was actually the genesis for the whole project, a song capturing his feelings during his lengthy chemo and battles with cancer as he sings "Pull on the rope and get me out of here" because "you can't call this living when you're buried in a hole" and how "if I had a pistol I'd shoot my head" to be rid of it, a song that features acoustic blues guitar and a refrain of "Set us free we wanna go home we wanna go home" that calls Ladysmith Black Mambazo to mind

It ends with the English folk swayalong feel of 'Roses and Wine', co-written with backing vocalist Lauren Field with Natalia Cerqueira on accordion and the pseudonymous Sir Gareth Twosticks on drums, the wry tale of a woman who drinks herself herself crazy and out of a job, eventually puts the boozing behind her as her husband and his long suffering wife leave "to pick up the pieces and start a new life", though it might just be a song about rehab.

It's extremely unfortunate that it cost him years of pain and the loss of several body parts in getting round to making this album, but it's hard to regret that such a marvellous debut was the end result. It lit the fuse, long may it continue to burn.