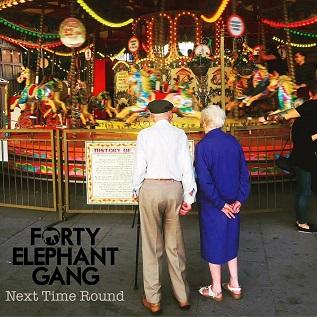 
Next Time Around is the debut long play from the all-male East London group named after an all-female gang of thieves. It's a diverse record, taking its influences from an array of different bands from different genres, reflective of the band's varied musical backgrounds. It does feature a nod to the Brit-pop glory days of the nineties, with lyrics full of imagery from normal life. There's a lot more at play here though, blending folk, Americana, bluegrass, and a touch of gospel.

Right from the first track, the album grabs the attention and doesn't let go. Songs of Praise is a sheer delight, somewhat reminiscent of later Beatles tracks, brilliantly layered and irrepressibly catchy. It keeps on building and building to a sonic crescendo before pulling back to finish on a more gentle note. Beside You skips along a little lighter, with more a modern indie vibe, and then the Gang pull another about turn and launch us into the Hollow Man Blues. It's hard to imagine an opening more varied.

The album is filled with highlights; Strange Things is a joy, superbly concocted and filled with a real musical flair. Young Man's Game, which features on the next Fatea Showcase Session, is more of a soaring folk classic, which will leave you tapping your toes in appreciation. Drunken Promise Song is full of a melancholy sense of longing and forlorn hope, but with a joyous playfulness to the lyrics. This is an album full of wonderfully light lyrical touches that never quite stays still, and is all the better for it.

If you caught the Gang's 2014 EP, Slow Down The Days, you'll already know a little of what to expect. Next Time Around is a definite evolution in sound however, fulfilling the promise of the earlier release and then some. This is a captivating debut album full of charm that will delight and enchant anew with every listen.