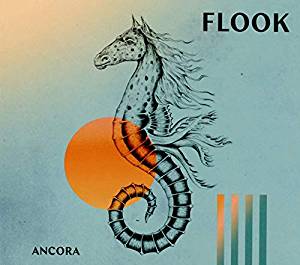 
The meaning of Ancora is, variously, “anchor” (Latin), “hope” and “again”. But dig even deeper, and note the quotation “Ancora impara” (meaning “I am ever learning”) which is prominently emblazoned on the sleeve; it’s a quote attributed to the 87-year-old Michelangelo, which could well apply to any musician worth his/her salt. The intrinsic wisdom of this humble admission is the key to musical progress and development, without which there would be no personal progress or development. Flook (I’ve ditched the exclamation mark) could well have adopted this as their own motto, for there’s always a keen element of development in their musical adventures, and even if a sense of direction is sometimes initially unclear to the listener its purpose will inevitably reveal itself on subsequent acquaintance.

Flook are a bit of an enigma; they formed in the heady days of folk-fusion well over 20 years ago, in 1995 (did someone suggest the name was a deliberate corruption of “flute”, since they had three flute-players in their ranks at the time?). Following Michael McGoldrick’s departure in 1997, John Joe Kelly joined Sarah Allen, Brian Finnegan and Ed Boyd, and that lineup has remained unchanged ever since. They won the BBC Radio 2 Folk Award for Best Band as long ago as 2006, but took a five-year break at the end of 2008, three years after releasing their last studio album Haven, ostensibly to follow their hearts and instincts and to explore the musical world outside of Flook (through solo album ventures, session work and stints with (variously) KAN, Waterboys, Lùnasa and Zakir Hussain – experiences that have greatly enriched the musicians and their audiences alike). They got back together in 2013, and now at long last, after almost five years of stupendous (if maddeningly occasional) live performances, they’ve got it together in the studio to record Ancora.

And back to that translation – “again” is a very appropriate description for the music within, for you’ll want to play it over and again. It’s also “again” in the sense of more of the same superlative standard of music-making that’s consistently graced their albums and heady live gigs alike for all those years. But for those who don’t “get” Flook’s music, the conundrum has always been a feeling of “not that again”, for it might seem that almost every track appears to revolve around, or stem from, a superficially similar jig- or reel-like motif played on the flute or whistle, normally at breakneck speed, over scarily complex guitar and bodhrán rhythms. So – why isn’t each album boring and predictable?… Well, it’s Flook’s absolutely unique combination of sensational musicianship and sensational symbiosis, the rapport and interplay, the astounding precision of phrasing and rhythm, the unfathomable tightness and phenomenal agility, the boldness of their musical flights, and yes, the immense variety concealed within the beauteous intricacy of the traditional-styled yet mostly self-penned tunes they play. It all sounds so effortless and easy – like breathing (flute players just breathe music don’t they?!), but you can be sure it ain’t!

OK, the first couple of tracks are indeed in the fast-and-furious category, but the pace changes dramatically for Sarah’s Companion Star which features a gently supportive accordion part courtesy of guest Phil Cunningham; the ensuing tune The Coral Castle brings in hammer dulcimer and steel drums (Simon Chrisman and Melvin Ifill respectively). Other guests momentarily appearing on the album include Patsy Reid (cello, viola, violin), Philip Henry (lap steel), Trevor Hutchinson and Conor McCreanor (upright basses), Amadou Diagne (percussion) and Mark Tucker (theremin). Another standout amongst the markedly un-frenetic tracks is the exquisitely lovely Lalabee, which brings in Matthias Loibner on hurdy gurdy. And there’s even some Asturian percussion (the pandereta tambourine) from Eva Tejador on Sarah’s brief tune The Bunting Field. Another outstanding guest contribution is that of Niall Murphy (fiddle) on the Turquoise Girl set (track 5). The glory is that each guest contribution is ideally judged and honestly unintrusive, and genuinely enhances the sound-picture in a definitely bespoke kind of way, with subtle layering. And vitally, nothing is allowed to distract from the crack playing and characteristic signature sound of Flook themselves. As brilliant, inventive, and tremendously exciting as always, and a rare instance of an all-instrumental album that holds our attention throughout. Music to move and uplift. Again and again. Encore!!