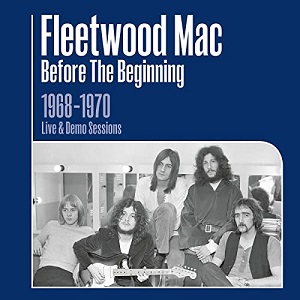 
This three-disc set premières two live recordings of Peter Green's Fleetwood Mac, unlabelled but authenticated as dating from 1968 and 1970, which have recently been discovered in the US - by pure luck. And approved for issue by the remaining band members. They provide something approximating to bookends of the early (Peter Green) incarnation of the band called Fleetwood Mac: the 1968 recording representing the very first - hard blues - phase and the 1970 recording being of one of the final shows before Peter left the band that May. Everything has been restored and remastered from original tapes which were found to be in surprisingly good condition, so although there are some inevitable minor aural flaws (a little crumbliness here and there on the 1968 set), there's no need to be unduly concerned.

I've long found it unbelievable (and very frustrating) the early Mac has never had proper representation in the live-album stakes; virtually everything available hitherto has been from the post-Peter-Green era. Peter, of course, has been reckoned as one of the most influential guitarists of his era, yet unlike many guitar heroes he was altogether less flashy and more modest and humble, displaying a more intimate - and human - approach that was not driven obsessively by technique but instead by pure feeling, which could be every bit as exciting for listeners (in my opinion even more so). And, as these newly unearthed live performances show, this early Mac was a very together outfit, notwithstanding the ostensible "leadership status" of Peter Green as implied by the name billing. Each group member is heard to contribute meaningfully to the whole, directly and with genuine enthusiasm and committed energy. The slow-drag original Something Inside Of Me provides an early pindrop performance during the 1968 sequence, but even so there's nothing routine about the remainder of the 1968 tracks.

From the start of Disc 2, though, the sequence doesn't gel. It feels more disjointed, almost like a different show entirely, with a pair of powerhouse r'n'r covers (Long Tall Sally and Willie & The Hand Jive) followed by a mere minute-or-so's excerpt of I Need Your Love So Bad - although things do pick up after that with an eight-minute Shake Your Moneymaker. From the complete absence of any background notes or even basic gig date information (black mark to Sony here), we're forced to resort to guesswork after that, but I'd surmise that the next track, Before The Beginning, is where the 1970 show starts - not least because that song had by then appeared on the band's late-1969 third studio album, Then Play On, which had marked something of a change of style for the band with its more expansive, at times quite experimental edge that took them further away from the harder-nosed authenticity and largely 12-bar structures of the 1968 repertoire. We then encounter suitably potent versions of classics Oh Well, Albatross, The Green Manalishi and Rattlesnake Shake (the latter two stretching out to 12 and 13 minutes respectively), an equally fiery Coming Your Way featuring a cracking Mick Fleetwood drum solo, and a welter of non-TPO material like My Baby's Sweet, My Baby's Gone and the harder-rocking Homework and Sandy Mary. There's also two different versions of Only You and the instrumental World In Harmony, begging the question of how many different gigs were sourced for this issue. Hence the caveat: sadly, us reviewers have not been supplied with the accompanying booklet notes, so we're given no properly detailed information regarding origins or identification of the specific gigs enshrined on these tapes. That in itself is particularly disappointing, notwithstanding the unquestionably exceptional musical quality of the performances. Finally, in addition to the actual 1970 live show recording/s, the third disc appends four demos (You Need Love, Talk With You, If It Ain't Me and Mean Old World), but we're given no indication of their provenance.

This three-disc set was first slated for release last June but was subsequently deferred to November. It's been supplemented by a special heavyweight vinyl release (a pair of 3-LP sets). It should go without saying that given the paucity of vintage live Mac recordings, this is a tremendously valuable release for the fan of those crucial "Peter Green years". Such a pity, then, that the documentation is so woefully inadequate.