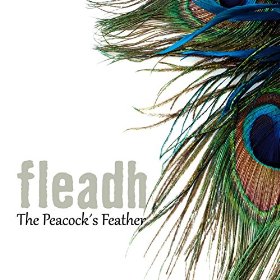 
Fleadh is a German group playing Irish folk music (that seems to be a bit of a trend of late!), whose second CD The Cleggan Bay Disaster I reviewed favourably back in 2013. Actually, I'd prefer to describe Fleadh's music as crossover folk-rock, for all that it exhibits a pronounced Irish flavour - for all that it's the Irish of the Saw Doctors, Waterboys and Luka Bloom as much as that land's purer instrumental tradition. As before, the band's singer, Co. Kildare-born Saoirse Mhór, is responsible for all of the album's original compositions, here comprising seven of the 13 selections. They vary between the spiky, driven irony of You Don't Have The Right (which comes over like a Kieran Halpin song sung by Christy Moore), the comforting yet questioning Tree Of Oak, the proud narrative Salt Of The Earth and the more reflective, introspective air of Table Of Losers.

The latter, like its companion Bridge Of Trouble, nevertheless incorporates a reel for its instrumental break, and this device gives something of a gig/party atmosphere to much of the rest of the band's music too. The healthy instrumental complement of guitar, bass, fiddle, banjo/mandolin, uilleann pipes/whistle and bodhrán is solid and well-balanced, with plentiful amiable and ebullient showmanship that, while suitably accomplished, doesn't need to proclaim or emphasise its expertise. For the formula of appealing sentiments and a catchy melody, all sealed and delivered with proven (and happily, not over-flashy) musicianship, is a well-proven one, with a number of illustrious precedents; the timeless appeal of this kind of crossover music is assured, and I can see Fleadh doing rather well with their live act on the UK's festival stages.

The album's first three tune-sets work particularly well, especially the Courthouse /Laurel Tree set which contains some fine soloing; the instrumental tracks genuinely give the songs a sense of perspective and context. But - at least on record - not every track feels entirely successful. The Killarney Boys set (track 11) gets going nicely and makes good progress through Hunt The Squirrel but just when things seem to be getting even more interesting it meanders into a cul-de-sac and runs out of steam, then just stops in its tracks.

Earlier on, the succession of stops and starts and mood changes of the Taka Tuka Set feels a mite forced. And then there are a couple of songs (e.g. Kick Me) where some of the sentiments are a touch obvious and/or well-worn. But back to the positives: presentation is good, with booklet giving us the song lyrics, also providing just enough information on the various tunes to satisfy any likely flood of FAQs of the "now where've I heard that tune before?" variety.

It's refreshing to come across a band that's equally skilled on both counts: on one hand, courtesy of master piper (and group founder) Frank Weber, the assemblage of, and the putting-across of the essence of, the traditional tune-sets and persuasively espousing the contemporary songwriting strand with its original writing. And finally, the recording is just fine, punchy and full of presence and commendably well-balanced.