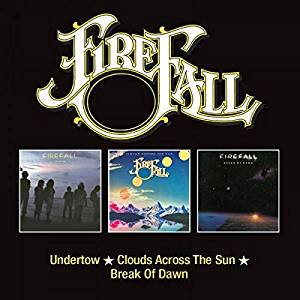 
What we have here is a double CD which contains the fourth, fifth and sixth albums by US "Soft Rock" band Firefall.

Firefall's first three albums [ also available on a 2 CD set from Beat Goes On Records] were all commercially successful ,as were a number of 45's taken from them.

However, by 1979 the band were burned out and their fourth album "Undertow" was the last one to be made by the original line-up as Clarke and Andes left after it was recorded.

Firefall's music can best be described as laid-back West Coast Soft Rock , in a similar vein to that of groups like The Eagles, Poco and America. Firefall's trademark sound was smooth harmonies, lush instrumentation, polished production and tasteful guitar solos.

"Undertow" is a classy album which spawned the hit single "Headed For A Fall" ,from the pen of Rick Roberts. Other highlights include the flute-driven ,upbeat opener "Love That Got Away", whilst Larry Burnett's acoustic, folky "Business Is Business" calls to mind Stephen Stills' solo acoustic work. Also noteworthy is the riff-heavy title track "Undertow" which closes the album is about as rock-n-roll as Firefall get.

1980's "Clouds Across The Sun" features a new rhythm section ,following the departure of Clarke and Andes, and sees Firefall moving to a harder , more rocky sound, as evidenced by Jock Bartley's opener "Be In Love Tonight".

For me the standout track on this album is a lovely cover of Jimmy Webb's "Old Wing Mouth"[from his "Angel Heart" album]. The tasteful arrangement perfectly complements Larry Burnett's powerful vocal performance but Webb's superb songwriting skills perhaps highlight the fact that Firefall's songs were just not that memorable.

In fact, "Clouds Across The Sun" sees Jock Bartley taking on a songwriting role . His "Quite Like You" reminds me of Joe Walsh's solo work and shows the new ,harder edge to Firefall's music.

The album closes with Rick Roberts' "Don't It Feel Empty", his swansong with the band as he left shortly afterwards.

Indeed, by the time of 1982's "Break Of Dawn", the only remaining member of the original line-up was Jock Bartley. He recruited two guitarists , John Sambataro and Chuck Kirkpatrick and, with various session musicians ,recorded "Break Of Dawn" which ,whilst it is a competent 1980's rock album , seems rather anonymous and ,unsurprisingly, sounds quite far removed from the "classic" Firefall sound.

One of the more interesting tracks on "Break Of Dawn" is "Dead Of Night",on which original member David Muse makes a re-appearance on flute and synthesizer. Also worthy of mention is Jock Bartley's "It's Not Too Late" ,which has a Stephen Stills-like feel [ Stills actually appears on the album as a guest].

In conclusion, this double CD gives you thirty tracks over the three albums. Some of the songs are fairly routine but there are some interesting ones too ,as I have outlined above.

If you want to investigate Firefall's music, I would suggest first trying the BGO 2 CD set which contains their first three albums "Firefall", "Luna Sea" and "Elan" ,as all their best-known material is there.

An Evening With Firefall