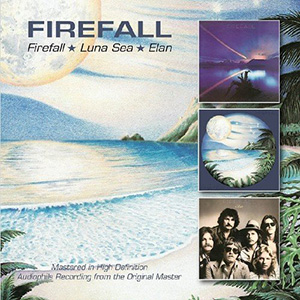 
With a C.V. that included an ex Country Rock tinged Flying Burrito, an original member of the Byrds, the guitarist from the highly respected Gram Parsons Fallen Angels and a fifth of West Coat rock band Spirit amongst their ranks Firefall's pedigree was assured from the start.

Almost though is never certain. Indeed when Rick Roberts from the sadly defunct Burritos chose to form Firefall with bassist Mark Andes (Spirit) and Jock Bartley (Fallen Angels), they spent a year gigging and working up demos which would be summarily dismissed by Atlantic Records.

As with many groups though perseverance is the key and finally Atlantic Records picked up on them. This was 1976. Their first album, the self titled "Firefall" went Gold in just three months, the fastest the label had achieved despite having the likes of Led Zep and the Rolling Stones on their books. Luna Sea, their second, a year later, reached the same level even quicker in just two months and their third Elan made Platinum.

It is these three albums that B.G.O. Have brought together in this budget priced 2 cd release.

But as to the music, their debut ploughs the fields that bands like the Eagles and Poco were sowing their seeds, mellow accomplished Country Rock which targeted both the AOR market but also hit the American singles chart. "Livin Ain't Livin" and "You Are The Woman" written by Roberts still regularly chosen for compilation albums to this day. Whilst their third single " Cinderella" had no magical ending. Larry Burnett, an unknown singer songwriter when he joined the band portrayed a young couple in love only for the lass to find she was pregnant : No happy ending as the guy kicks her out and sends her on her way. The message was picked up by feminist groups at the time and with protests made, the airplay for the single stopped and it dropped like an anchor.

Sensitive though the band could be as shown on the excellent "Dolphin's Lullaby" which benefits from luscious sax, flute and keyboards from David Muse who would join the band fully for their next two releases.

"Luna Sea", (a pun on lunacy), polishes their light soft rock sound even further, songs for lovers in and out of relationships, looking forward, looking back, simple often quoted advice but wrapped up in a way that had you wishing, wanting, longing as your empathy strings were tugged, at least if you grew up with this music.

And with any Seventies releases, the question always pops up "Is it dated", the answer with Firefall is a resounding "No", the music is as fresh as today's newly baked, hot out of the oven bread, the High Definition mastering is superb as usual from the folk at BGO.

The final album here "Elan" starts with the hit single "Strange Way", it precludes a more rockier release with romantic anguish being the underlying theme.

Anguish that summed up the bands position perhaps as the continual touring and heavy recording schedule including their second and third albums being rejected and needing re-recording took its toll. The band burned out they had hit a brick wall. Subsequent break ups and changes of personnel ensued. The band with various lineups though continue to tour to this day.

These first three albums represent Firefall at their peak.

You Are The Woman