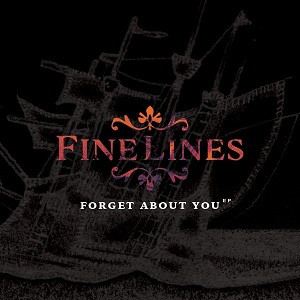 Fine Lines
Album: Forget About You EP
Label: Self Released
Tracks: 4
Website: http://www.wearefinelines.com
.Hot on the heels of last year's debut album, Hour Of Need, comes a new EP from Fine Lines, the project started by David Boardman in 2016. The debut album was highly impressive; an entertaining set of songs that keep you captivated from start to finish. The EP takes two of the best tracks from the debut, and two new songs, to produce a fantastic taster of what Fine Lines are about.

The title track kicks off the EP, and is one of the songs that appeared on the debut album. It's a slow build, kicking off with some gentle guitar work and close harmonies, before the band joins in to turn it into something altogether more rousing. Feet Don't Touch The Ground was the best thing on the debut, and it remains so on the EP. It is the most ridiculously feel good song that once burrowed in between your ears, is guaranteed not to leave.

Who Do You Love is one of the two new tracks, and is a complete change of pace. The vocals of both Boardman and Zoe Blythe combine wonderfully with the fiddle of Neil McCartney (Merry Hell). Begging You features Blythe on lead vocals with the bluesy feel turned up a notch, reminiscent of the Rolling Stones or Springsteen and the E Street Band. Both the new tracks are great additions, and make the EP well worth purchasing even if you have the album. Of course if you don't yet have the album, Forget About You acts as the perfect appetiser.