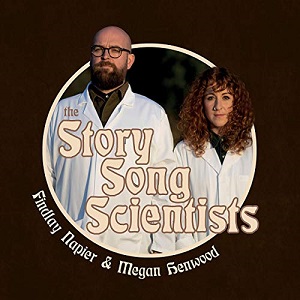 
Take two white lab coats, look serious, after all this is "The Story Song Scientists" EP isn't it.

This is Findlay Napier, an observational songwriter par excellence who hails from Scotland and Megan Henwood, based in Oxford, an equally dazzling talent whose music is earning rave reviews in the mainstream press.

Together, the collaboration which first came about at a songwriting retreat of the English Folk and Dance Song Society in 2016 at Aldeburgh, works as both artists compliment each other perfectly. You could be forgiven for believing they had honed these songs after years of playing them on the road.

From the opener "Unnameable Radio", a melancholy tale that takes us back to 1971 with night owl DJ Bob Fass on radio station WBAI as he keeps a suicidal young man talking long enough for the call to be tracked, help to arrive and a life saved.

Some lives are troubled, even great minds, "End Of Numbers" is an uptempo exploration of the beliefs held by German Mathematician Georg Cantor whose belief in God helped him propose an infinity of infinities, endless possibilities beyond our control. It's a song that builds and builds "layer upon layer" and if there's a resemblance to the style of the Proclaimers here, ("Numbers" would in my opinion fit seamlessly into "Sunshine Over Leith" a film that never fails to raise a smile and shed a year) then that's no bad thing in my book.

Another style change, the poignancy of Nick Drake is evoked in the "North Pond Phantom", the story of Christopher Thomas Knight, a hermit who lived in solitude in the woods of Maine USA. for 27 years where the winters reach temperatures of 27 degrees below. In the hands of Napier and Henwood we are transported, the lyrics flow like a trickling brook creating picture after picture, "Took to the woods, packed and headed North, drove right through his home town didn't even stop, kept on going till he ran out of gas, left the car open, keys on the dash". "…Stealing food is easy when you're hungry and you're cold. Never smashed a window or broke down a door, took only what he needed, not a mouthful more. Moon moves the minute hand, seasons turn the hours, your name becomes a memory…" a vision of time that is unshakable.

Unshakable believers, Antelope, Oregon in 1984, the riff driven "Wild Wild Country", examines the effect that a religious cult can have on its followers and those unfortunate enough to be caught up in something they have no choice in culminating in an outbreak of bioterrorism. Heavy subject matter handled with a lightness and deft of touch that delights and rewards. You want to research more, you are enthused, it's like being back in school with those teachers who instill knowledge with an element of love and passion for the subject.

Throughout the songs the pair never fail to produce lyrics that resonate, "There's so much love and hate in polycarbonate…. Raise your glass and toast the last straw" an apt social commentary on the use and misuse of plastics in the environment, even Mc Donald's have now done away with plastic straws although the irony of a cardboard tube pushed through a plastic lid is still bizarre.

"The Last Straw" is though a fitting way to close this EP, it leaves you wanting more, the variety and sheer beauty of the music on offer here is truly outstanding.

Megan Henwood and Findlay Napier are currently jointly touring to promote both their individual talents and this release. Two of Britain's finest songwriters together in one package. Not to be missed in my eyes.