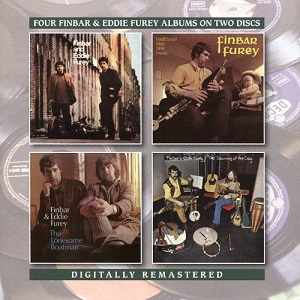 
This good-value two-disc set collects together under one handy roof the first three classic LPs by the duo alongside the album of solo piping by Finbar which was recorded between the first two duo albums. All of the LPs have been recently remastered, and sound just great – fresh and immediate as the day they were recorded, with abundant presence and definition. The set comes with a nice thick booklet containing the original sleeve notes and a handsome, comprehensive essay by John O’Regan. Excellent in every respect. So what about the music within?

As just two brothers from a very musical family, Finbar and Eddie were playing music together since age nine, and Fin alone had already won over twenty championships for his piping by 1966, when the brothers won an international folk award as a duo. They relocated to Edinburgh the following year, and quickly gained a reputation for their playing and singing; their debut LP was recorded by Bill Leader in 1968 and released on the Transatlantic label. It was a straightahead collection of mostly traditional material, alternating tunes with songs in performances that can only be described as wonderfully, eagerly impassioned, without a hint of routine. It’s hard to recall a time when songs like The Curragh Of Kildare, Come By The Hills, Dainty Davey and Leezie Lindsay were not part of the common folk repertoire, but Eddie’s vocal renditions can be confidently placed as classics of their kind and truly definitive readings that really stand the test of time. The same can be said of the tunes, many of which have since become session standards. These are pure, unaffected, joyously confident performances, with no need for grandstanding or proving the boys’ considerable talents, and you’ll be hard put to hear more vibrant takes on the likes of The Spanish Cloak or the slow air Eamonn An Chnuic (Ned Of The Hills). Finbar’s solo album, issued in 1969, continues in the same vein, with spirited performances – not just on the uilleann pipes but also on a variety of whistles – of a baker’s dozen of grand traditional tunes – jigs, reels, airs, a hornpipe, a planxty, a couple of fancys, taking us from Rakish Paddy through Madame Bonaparte to The Silver Spear. Classic stuff, what it says on the tin and very good too.

The brothers’ second LP, The Lonesome Boatman, followed later in 1969, by which time they’d cut a considerable dash as a must-see live act throughout Britain, raw and exciting with an unusual instrumental permutation, and especially celebrated for their capacity to move so easily between frisky uptempo dance tunes and desolate slow airs, animated ballads and chillingly plaintive songs. This brilliant collection comprised six songs and four instrumental items; among the former were the rarely-heard Let Me Go The Mountains and Dance Around The Spinning Wheel, whereas the latter included Fin’s original Indian whistle showstopper (which by then had earned its status as title track), as well as a jig played on the mandolin, and finally, the stunning, epic piping showcase The Fox Chase (interestingly, mirroring a similar pole-position placing for The Fox Hunt on The Chieftains’ roughly contemporary second LP), which is prefaced by a spoken explanatory introduction detailing the tunes played. This album’s dearth of informative sleeve-note is made up for by the erudition of the aforementioned booklet essay, which also informs us that the brothers were dissuaded from including bass and drums on the record … speculate and discuss…!

The final Finbar & Eddie Furey album included on this set is something of a rarity, and (as far as I can ascertain) this is – unaccountably, considering its quality – its first time on CD. The Dawning Of The Day came out in 1972, on the Dawn label, following a period when they performed and toured with The Clancy Brothers when Tommy Makem left their band. Although this new album introduced the Fureys to a more mainstream audience by dint of its fuller sound (including banjo, fiddle, mandolin, string bass and some drumming), the duo’s trademark energy and passion, now even more honed by live performance, were still very much present, and not in the least sacrificed. The album contained authoritative reworkings of traditional ballads such as Reynardine, Jennifer Gentle, Locks And Bolts and Sally Sits Weeping, alongside a clutch of spirited instrumentals, and presented a well-rounded and accomplished collection that found the brothers at an artistic peak. A single taken from the album covered Gerry Rafferty’s Her Father Didn’t Like Me Anyway, and received airplay on John Peel’s radio show. After releasing this album, though, the brothers capitalised on their well-received German appearances by signing to German label Pläne, who issued four Finbar & Eddie albums in the following four years that, while partially duplicating some earlier material, were nevertheless representative of their massive success in Germany.

A self-recommending set, and a staple for the essential ’60s folk collection.

Come By The Hills