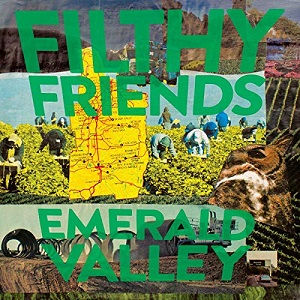 
Rather an intriguing prospect are Filthy Friends. Aside from taking a fantastic name for the band, running down the teamsheet you'll find R.E.M's Peter Buck as the highest profile name, although Sleater-Kinney co-founder Corin Tucker, Kurt Bloch and Buck's R.E.M live band buddy Scott McCaughey will ring a few bells for those of us whose musical knowledge runs a tad deeper.

Kickstarted by Buck's grinding blues riff that evolved into the title track, sparking the album into life, it's hard not to have Athens, Georgia's finest in the back of your mind. Some may feel a nostalgic rush as there may be that initial element of Buck heading back a few decades with the trademark jangly pop of the opening song. However, don't be lulled into a sense of false security; a darker undercurrent hides below the surface amidst talk of "backbreaking work for little pay." It follows with a healthy acknowledgement of the world's issues with itself as the songs bristle with thoughts of human arrogance, the wheels of capitalism, hubris and inequality. They're all expressed through a blend of edgier rock and a blast of fiery punk in 'Last Chance County' that's delivered with enough of a sneer to make it sound as if Siouxsie Sioux might have made a surprise appearance amidst the weaving and wild guitar lines. Elsewhere, 'One Flew East' builds from a Nirvana styled opening into a cool groove and there's an easy balladry to 'Angels' and album closer 'Hey Lacey'; the gentle electric strum of the latter awaiting the kick drum entrance that never appears and all the better for resisting.

'Emerald Valley' makes its mark as an album of good traditional values with ten songs that rarely break four minutes, what would look good as five songs per vinyl side complete with get up and flip over the disc moments as you indulge in some new wave, fuzzed up country rock for modern times