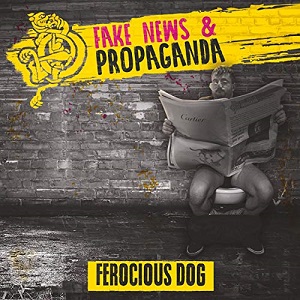 
There are three notes at the beginning of "Cry of the Celt"that I thought were going to give us the folk-punk version of All The Young Dudes, and they are quickly pursued by one of the finest starts to a folk-rock-punk album since The Levelling of the Land. If that doesn't whet your appetite then nothing will. Don't get me wrong, this is very much Ferocious Dog, but the album starts with a maturity that sustains throughout. I expected a ferocious pace from "Fake News & Propaganda" and "Traitor's Gate" gives you that in spades. Lyrically the song could be a metaphor for today's inhumanity. Historically, we British have multiple shameful stories where authority exercises extremes of brutality to instil fear and humiliation.

You don't listen to a Ferocious Dog album without expecting politically targeted songs. "Cover Me" is right up there with the best protest songs, 'Roll back the years and I'm just a lad as I go down the pit and work with me Dad….and we live by the sweat of our brow'. It reflects on the 1985 Miner's Strike and continues the theme of authority using a sledgehammer to crack a nut, but also tackles more generally the problems of abandoned communities. When there's no work and no money, the choice for young men is all too frequently a career in the military or a life of poverty, and for young women sometimes a life of prostitution, hinting here at the Rotherham child abuse scandal. The song also relates the personal tragedy suffered by the Bonsall family on 3rd March 2012, when 24 year old former soldier Lee Bonsall took his own life. The Lee Bonsall Memorial Fund was established three months later in support of veterans' groups, so please consider a donation.

It doesn't need me to tell you what "Fake News" is about. We live in times when it is hard to believe anything anymore, and when the media in all its forms has become a vehicle for government to manipulate information and control society. This is Ferocious Dog wearing their political heart on their sleeve. The song bounces its message at you, as uncompromisingly as the fake news itself.

The ethereal vocal at the start and acoustic vibe of "Lacey-Lee" changes the pace of the album and brings out the true quality of Ken Bonsall's voice. The band have been around a while and know how to deliver powerful songs with sensitivity. "The Landscape Artist" is after my own heart, tackling the increasing rate of destruction of our open spaces that give us the air we breathe. This is the band's salute to Extinction Rebellion. Good lads.

"Up All Night" has an East European vibe, and deals with the elephant in everyone's room right now. Lyrically brilliant with an 'Oy Oy Oy' in the chorus, this is a vibrant, cleverly delivered song with a different vocal: 'They must have miscounted my passport turned blue overnight' pokes fun at the insanity of the political debacle that has ensued since June 23rd 2016.

Football is dear to a number of the band and "Justice for 96" needs no explanation, and is one of the few times you will the tragedy of Hillsborough covered in a song. I watched Derby County beat Manchester United at Old Trafford that day, as the numbers of dead kept rising. It was a day when football stopped mattering, but also one where a tragedy brought the football community together. All these years on and the families still do not have justice.

It's a sign of a confident band when they can take a song from an iconic folk album from the 1970s and belt it out in their own style. "Bedlam Boys" feels live. It is a relentless 3 minutes, and a song that must surely grace the band's live sets. How do you end and album like this? With a song like "Yellow Feather" that's how. This is single quality, in terrific singalong style, great playing, lyrically connecting, and brings this fabulous album to the kind of close that has you putting the whole thing on repeat.

Fake News and Propaganda tackles subjects that we can all relate to. It's unashamed politically, and delivers a contemporary social history lesson in the best traditions of folk rock.