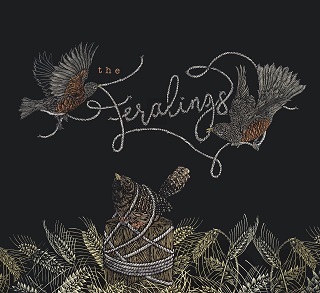 
Their name possibly derived from a race of fey halflings in the World of Warcraft gaming series, an acoustic roots trio from Iowa comprise Patrick Bloom (guitar, upright bass), Nicole Upchurch (clawhammer banjo, guitar) and husband Benj (mandolin) with contributions from former member Stacy Webster on guitar, this is their long gestating debut album following on from a 2012 EP.

Bluegrass is the default setting with some lively, choppy playing from Nicole, things kicking off in the backwoods with her taking reedy vocal lead on the strongest track, 'Humming Machines', a lilting world-weary strum about wanting to escape the noise of the world and "quiet my brain" on which she strikingly stretches out words like humming and restless to capture that sense of mental tension.

Featuring Webster and Jakob Breitbach on fiddle, Patrick steps up for 'Maybelline', a sprightly song of simple unspoken love for a "chapel girl resolute and chaste prettier than a daffodil with curls down to her waist." Things take a bluesier swerve for Nicole's 'Perennials', Webster on slide, an upbeat lyrically metaphorical song about spring returning after the winter snows.

Benj providing mandolin accompaniment, Patrick's summery 'I Shall Bring You Flowers (The Sun God)' again deals in unconsummated romantic yearnings, here the titular sun god sneaking into a sleeping woman's bedroom to wake her and try to win her heart ("you could love me if you'd only try"), she rebuffing him by reminding of his restless nature ("I have seen you ride your lions through the sky").

Nicole provides the final two tracks, 'Lila' another bluegrass blues with a touch of gospel and Webster on slide and high strung Nashville guitar for a song recalling the girl with the voice from God who sang in the downtown church, married a farmer, raised a family and is now lost to Alzheimer's. It ends on the banjo dappled, melancholic 'Weeds In The Wall', another song with references to religion and nature (Ralph Waldo Emerson is n influence), that finds comfort from the world's trials ("Like a bottle on the ground I've been kicked all around") in "a church or on the ground", a reminder that miracles can be found in the most inhospitable places and that "We are God in Nature/We are weeds in the wall."

Various personal changed and setbacks meant the album ended up being recorded over the years, at least one song dating back to 2012, but having finally emerged into the light of day, here's hoping the road ahead has no more speed bumps to slow down their future progress.