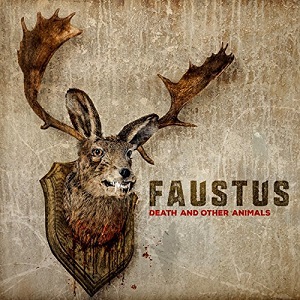 
A popular feature on the folk circuit for many years, Faustus are back with their third album, Death and Other Animals. Combining the musical talents Bellowhead alumni Paul Sartin and Benji Kirkpatrick with the former War Horse Songman Saul Rose, Faustus are rightly hailed as "One of Britain's outstanding folk bands." Having spent 2016 as artists in residence at Halsway Manor, National Centre for the Folk Arts, the boys have returned to the studio with some unique songs from the Ruth Tongue archive.

The album opens with Slaves, a rousing track based on the poetry of William Sankey with original music from the band. This is cleverly spliced with a traditional tune, Foul Weather Call. Another traditional song featuring the vocals of Paul Sartin, While Gamekeepers Lie Sleeping tells the story of a poacher and his dog having a successful night out and a celebratory drink. It is underpinned by an unusual, slightly angular instrumental arrangement that gives it a light and jaunty feel, well suited to the lyrics. This is in complete contrast to the following track, a song from the pen of Bill Craddick. Oh to be a King is a much more wistful song about the disparity between the rich and poor, still highly pertinent today. The initial sparse accompaniment on the melodeon with open harmonies, develops into a richer harmonic structure, enhanced by some perfectly judged violin interjections. This is again paired with an instrumental, this time an original from Benji.

With strong links to several morris traditions, several tunes have crept onto the album, in partnership with the songs of the Ruth Tongue archive. Firstly, False Foxes. This is a brilliant song, brilliantly arranged that has been a real ear worm from the first hearing. The band have paired it with the morris tune Idbury Hill, a personal favourite. The song Death Goes a Walking is also matched up with a Cotswold tune, The Black Joke. While the song talks of the dance of Death, the use of a morris tune conjures up wonderful images of Death dancing a Cotswold jig! Also from the archive comes Deadly Sands, a cautionary tale of wreckers along the coast and Death of the Hart Royal, a reconstruction of a 15th century ballad with a new tune.

This album is an exceptional display of phenomenal musicianship. From the wonderful instrumental dexterity, through the beautifully balanced vocal harmonies, to the perfect balance between traditional and original. The access to the vast archives of Halsway Manor has clearly provided Faustus with endless inspiration that makes Death and Other Animals an essential listen.