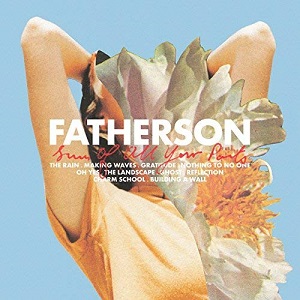 
Scottish alt-rockers Fatherson are back with their third album, following up from the highly successful Open Book in 2016. The success of the first two albums led to them touring alongside the likes of Twin Atlantic, Idlewild, and Kings of Leon; not to mention filling out a 12,000 person tent at T in the Park. But Sum Of All Your Parts is a subtle change, especially lyrically, and an attempt to break out of the Brit-rock mould they've found themselves being placed in.

The album has a strong opening. The Rain is a nicely brooding track with heaps of intensity and an impressive emotional resonance. First single Making Waves is a little more upbeat, with a soaring chorus that would go down a storm with the festival crowd. At times Fatherson sound like a cross between Biffy Clyro and Arcade Fire, producing music that knows when to challenge, and when to turn it up a notch to provide more crowd friendly foot stompers. They straddle that line very well, and are never afraid to throw in a change of pace.

Comparisons to Arcade Fire are especially apt on Nothing To No One, with Sarah Howells providing vocals on the track. It's a wonderful song, with Ross Leighton's vocals mixing beautifully with Howells. Charm School is the second single on the album, and it's another upbeat crowd-pleaser. Highlight of the album though is probably the delicate but powerful Oh Yes. It starts off simply with Leighton's vocal bearing the weight of the track, and then it explodes into life before pulling back again. There are showier songs on the record, but this one lingers long after the music stops.

Recorded live and in chronological order, the album catches the raw energy of a gig performance. It's a confident and captivating album that moves effortlessly from intense rock sections to soaring radio friendly pop choruses. Placing emotion and sincerity front and centre, this is a solid stadium rock album that should find many friends.