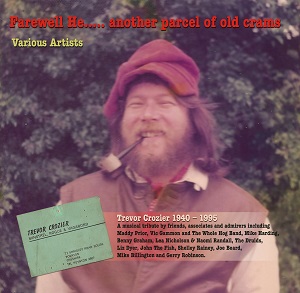 
The subtitle of this well-stocked CD - "Another parcel of old crams" - may well appear elusive, or should I say cryptically allusive, to those not "in the know". (Except perhaps in describing the disc as well and truly crammed!) But read on… in the sense of "give us a clue", I'll venture the opinion that what it does par excellence is to capture the colourful spirit of the folk revival of the late-60s/early-70s, an era before the word "eclectic" had really been coined, and in particular the spirit of one of the scene's most unforgettable "characters", Trevor Crozier, self-styled champion of the dubious genre "scrumpy & western" and co-writer of Wurzels classic Don't Tell I, Tell 'Ee. But wait - don't write this gentleman off, for he's better described in the words of the press release thus: "a gaudily attired West Country born lad who settled into the London scene via Dublin", who added to his West Country repertoire by performing British, Irish and Breton folk, USA jugband blues, country, vaudeville, music hall and novelty, and original compositions - and he was also something of an unsung pioneer of early music! No surprise, then, that he was a remarkably multi-talented man who could almost incidentally boast an unexpectedly consummate mastery of a large number of exotic and obscure instruments; a man whose presence and influence - and importantly, sense of fun and adventure - pervaded countless sessions masterminded by Bill Leader. However, Trevor's name only appeared in the credits of a select number of LPs of the era, notably those by Giles Farnaby's Dream Band, Lyonesse and his own Broken Consort (hence the Parcel Of Old Crams reference - it was the title of their sole LP release), and the cannily titled mid-70s live set Trouble Over Bridgwater. Oh, and he also had "bit parts" on an early Cyril Tawney LP and played jew's harp on Shirley Collins' seminal No Roses album (now there's a claim to fame!) …

Farewell He… pays "very belated" tribute to the memory of Trevor (who died in 1995 in a motorcycle accident in Malawi), It takes the form of a collection of 24 affectionate and aptly characterful performances donated by his friends and admirers, illustrious and well-regarded folk artistes the vast majority of whom had some kind of direct connection with Trevor. For those listeners with imperfect memories (ironic in view of the number of participants who can't actually remember when they first met Trevor!), many of these connections are helpfully expounded in the accompanying booklet's biographical notes.

So the musical content of this tribute collection is predictably wide-ranging and idiosyncratic. There's a goodly helping of suitably spiritful renditions of traditional song, courtesy of Liz Dyer (erstwhile recording partner of Dave Goulder), West Country compadre John The Fish, a multitracked Maddy Prior, Shelley Rainey (of The Bailey Sisters), and Naomi Randall with Lea Nicholson. Fittingly, the latter pairing also gives us a delightful hornpipe, the hilarious patter-song The Rest Of The Day's Your Own and a chummy take on Candy Man (as based on the early Grateful Dead treatment).

We also find a couple of tracks by The Druids, who had originally joined forces with Vic Gammon and Trevor's wife Annie (aka Broken Consort) on the A Parcel Of Old Crams venture. Blowzabella's Paul James helps out on a few tracks, while Benny Graham lends his lusty tones to the Tommy Armstrong song (Hedgehog Pie), and Mike Harding gives a sensitive "cowshed" account of Cyril Tawney's plaintive Oggie Man. Fittingly, Chris Joe Beard (of Purple Gang) and Epona label boss Mike Billington - joint instigators and curators of this project - crop up on a number of tracks - including the Cornish-eccentric-styled instrumental McTrevor The Magnificent and a puckish rendition of Trevor's notorious composition Dead Dog Scrumpy featuring the bass crumhorn! And original Purple Gangers Joe Beard and Gerry Robinson turn in an irresistible (and delectable) performance of Will Shade's Jug Band Waltz. Finally, it's right and proper that Trevor himself should be given the last word; thus the CD ends with a track from the Trouble Over Bridgwater set, an idiomatic music-hall-style number by Bill Oddie that also features guest Bob Kerr.

This memorial project succeeds admirably in its aim to capture the essence of the "Crozier Charisma". I can predict that Farewell He… is destined not only to conjure fond memories but also, in so accurately bringing back the special flavour and unselfconscious anything-goes freedom of those bygone folk days, to give hours of listening pleasure - and not just for the proverbial "long car journey".