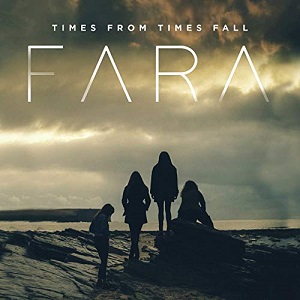 
Fara is an all-female Orkney-based quartet consisting of four young fiddlers (Jennifer Austin, Kristan Harvey, Jeana Leslie and Catriona Price), all four of whom also sing, while Jennifer provides the piano backing (acoustic or electric) for most of their music. As you'd expect then, the group sound is commendably full and rich and fiery, but they also know exactly when to pull back and observe the niceties of dynamics.

Fara originally came together around five years ago, after making several appearances as "The Chairettes", backing band for The Chair. All the members had known each other since childhood, and playing music together had by then become second nature, but they took a couple of years before releasing their debut album Cross The Line back in October 2016. That CD impressed me greatly, marking them out as a band to watch - and their brand new second album is even better, with an even firmer command of ensemble complementing an even more pronounced awareness of their four specific, contrasting musical personalities and of how each brings something individual to the mix, while all the time celebrating the common factor of the Orkney fiddle tradition in their upbringing.

Times From Times Fall delivers a satisfying and well-coordinated sequence comprising eight instrumental tracks sensibly interspersed with four vocal tracks. The latter include settings of Speir Thoo The Wast Wind, a poem written in the Orcadian dialect by Christina Costie, and two poems by Orkney poets - Edwin Muir's beautifully evocative, albeit plainly titled Song and George Mackay Brown's song of travel The Road Home (the latter done to a wistfully bluesy gait). The remaining song is an original composition by Fara's lead vocalist Jeana; the touching See It All was written in memory of her cousin Doreen. The album's tunes are all penned by group members, and range from the delicate, elegant and beautiful (Frances' Day, At The Ebb, Maxwell's Light) to the proudly energetic, thrusting drive of The Depliction set, the stirring strathspey-and-reel concoction Simple Dirt/The Fighter and bright-eyed disc opener The Port Polka.

Fara's music remains spellbinding, thrilling and genuinely exciting, at whatever tempo, and Times From Times Fall proves a disc to cherish.